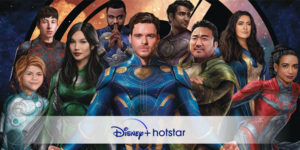 With a unique storyline, new characters, and a stellar star cast, the Eternals marks Marvel Studios’ first massive swing into Phase 4. Eternals is a new beginning for new and old Marvel fans, exploring the realms of superpowers like never before- there’s something for everyone. Layered relationships forged over thousands of years, the dynamic between the Eternals characters are worth going gaga over. These superheroes display a great deal of vulnerability and support amongst and for one another, something that is rarely appreciated in superhero movies nowadays. Directed by Chloe Zhao, Disney+ Hotstar is set to Stream Eternals in Hindi, Tamil, Telugu, Malayalam, Kannada, and English on 12th January.

The relationship between Kingo, played by Kumail Nanjiani, and Karun, played by Harish Patel, carries much of the comic relief in this movie, making their friendship beautiful. Karun is there to ensure everything that Kingo needs are always met, wherever they may be. Although it isn’t clearly seen, you can see that Kingo appreciates Karun- having shared with him his biggest secret- an indicator of his trust in his best friend.

Makkari & Druig’s playful and flirtatious relationship make them super endearing to watch. Druig portrayed by Barry Keoghan isn’t a favourite amongst the Eternals yet Makkari played by Lauren Hidloff brings out his humanity. The only character who has signed to Makkari from the beginning, Druig’s lighter side is brought out by her and he brings out a side of playfulness to her that just exists with him, truly heartwarming.

Sersi played by Gemma Chan and Ikaris played by Richard Madden bring out the best in each other even though their love is doomed. In the movie, his inhumanity is a huge driving force in her actions- her humanity is what sways Ikaris to save Earth from The Emergence- a cosmic event that happens once in a few billion years signifying the birth of a celestial.

Thena portrayed by Angelina Jolie and Gilgamesh portrayed by Don Lee display love and warmth like no one’s business. After Thena is afflicted by Mahd W’yry, a condition that makes her dangerous to others, Gilgamesh swears to watch out for her- and together they lead a quiet life.