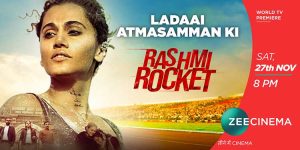 A tale of perseverance, struggle, righteousness, and respect – Zee Cinema is set to bring the story of a female athlete who runs the test of fighting for her self-respect and identity. Shedding light on an important subject and questioning the rules of society, Taapsee Pannu’s Rashmi Rocket premieres at Zee Cinema on 27th November at 8 pm.

A directorial venture by the visionary storyteller Akash Khurana, the film is rated a staggering 7.7 on IMDB, a testimony for bonafide performances by the talented Taapsee Pannu- fearless Rashmi Vira, Abhishek Banerjee- a lawyer who fights for justice and Priyanshu Painyuli- Rashmi’s pillar of strength. Supriya Pathak, as Rashmi’s mother, and Supriya Pilgaonkar, as the judge, play pivotal roles as strong female characters in the movie.

Rashmi Rocket isn’t just about that one make-or-break game in the climax or the journey of an athlete, it is a roar for the countless nameless women from small towns that have faced and continue to face inequality and bias. This legal drama is about the battle against the system, about the unjust rules for women athletics, which was challenged in the court and changed the rules of sports forever for the world. Through its exploration of a little-known subject, with impeccable storytelling, and powerful performances, the film promises to inform, entertain and educate its audiences till the finish line.

Sharing his experience, Priyanshu Painyuli said, “Playing the role of Captain Gagan in Rashmi Rocket has been more than special to me. Growing up, I witnessed the journey of my dad who is a retired colonel from Assam regiment. It’s because of him that my fascination and inclination towards the armed forces only grew, while acting is something that is my passion. My love for cinema and my deep respect for the army perfectly coalesced in this role and I am only grateful that it was offered to me. I remember sending pictures to my family in the army uniform and they all told me that I resembled my dad from his early days as a young captain”

Talking about his character, Abhishek Banerjee, said, “Whenever I pick a role, I place the script and the character at the primal importance. When I read about my character in the film, I was immediately intrigued as Eeshit is someone who fights for a cause – an athlete, someone who takes a stand and wants to bring about a change. To prepare for the role, I always thought of someone who fights for change and maybe that’s why I connected with the character. I think this came as a great opportunity to understand a human-like that and it inspired me in ways I didn’t imagine.”

Rashmi Rocket features the inspiring story of Rashmi Vira- a spirited tomboy from Kutch, with a carefree childhood and supportive parents who always encouraged her to push her limits and become a world athletic champion. However, her career comes to a dead end when she becomes a victim of gender bias faced by female athletes. Thereafter, begins her journey to overcome all barriers and fight for justice.