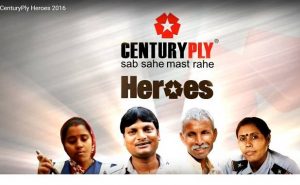 Century Plyboards (India) Ltd., India’s largest manufacturer of plywood and laminate is back to celebrate the contribution of real ‘heroes of life’ and saluting their power with its annual award-winning campaign ‘CenturyPly Heroes’ 2021. Following the legacy of reiterating the commitment towards excellence that started back in 2014, this year the brand has taken a step ahead and showered tribute for heroes beyond the glory of festivity.

The shortage of organs for medical help is a universal problem and our country significantly lags far behind than the other countries in the world. As only 0.01% Indians consent to donate their organs or tissues which can be as useful as saving or enhancing a life, the need to generate awareness and encourage more people to pledge for this initiative is paramount. CenturyPly, as a socially responsible brand, believes that Beauty Is What Beauty Does.

The real beauty of the products of CenturyPly are, that they are not only super attractive to look but are also functionally excellent. Likewise they believe, that the real beauty of people are not merely confined to their looks but actually what get etched in  peoples’ mind and heart are the deeds they do.

Through this campaign CenturyPly acknowledges the value of organ donation and salutes those heroes who even after leaving their soul, lives through other’s existence. Despite the challenges, there are individuals whose selfless inspirational stories motivate us to envision the brighter side of life. Celebrating the bravery and kindness of the people who pledge to donate their organs after death, CenturyPly has curated this year’s Heroes campaign with a short film.

Conceptualized by Wunderman Thompson and created by Visual Audio, the film depicts emotional sequences between two families where an elderly parents visit a little boy on his birthday, to whom their late daughter has donated her eyes. The mother’s realization to see her daughter in the eyes of the recipient boy reveals the highest power of humanity show how organ donors remain immortal heroes of the society, serving to the betterment of a life forever. The film has starred renowned actors – Beena Banerjee and Prithvi Zutshi, along with others and will be promoted across digital platforms.

The brand has also extended support to Mohan Foundation in corneal transplant of underprivileged patients under their noble initiative ‘Anudaan Making Transplants Affordable’.

Remarking on the launch of the campaign, Mr. Keshav Bhajanka, Executive Director, CenturyPly said, “We are highly excited to announce the launch of CenturyPly Heroes 2021. Continuing with the tradition of celebrating the real heroes of life, this year we have expressed gratitude for the heroes in form of organ donors in our society, who show one of the highest marks of kindness to save a life. We at CenturyPly, take a conscious call on the concerning issue of organ or tissue transplant in our country and my sincere hope is that people identify the messaging of this film and come forward to make a better world.”