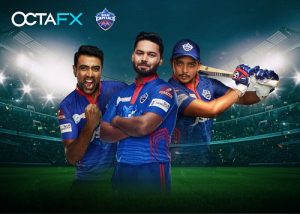 After being shut down mid-season due to a resurgence of the COVID-19 pandemic earlier in May, the 2021’s VIVO Indian Premier League resumed its matches on 19 September 2021. As the Official Trading partner of the Delhi Capitals, the broker OctaFX launched an educational campaign, among other initiatives.

Back in spring, due to the second wave of coronavirus in India, the VIVO Indian Premier League (IPL) matches were paused indefinitely. Much to the delight of the Asian cricket community, the IPL tournament resumed on 19 September.

The IPL games were moved from India’s capital New Delhi to the United Arab Emirates. The venue change was agreed upon back in May. As many companies were affected by this sudden cancellation, it is worth stating that some resilience was shown by the broker OctaFX. The fintech player joined Delhi Capitals as the Official trading partner in the first quarter of 2021. It was a quantum leap of a deal that gave OctaFX their first trading partner status in IPL history. The agreement, which carries an exclusive digital content partnership with the brand, is the first-of-its-kind for Delhi Capitals.

To commemorate this partnership as well as the IPL relaunch, OctaFX has an educational campaign and some promotions in store for the remainder of the IPL tournament period, up until 15 October 2021.

What has OctaFX got in store for the IPL?

For starters, they launched an educational campaign spanning from 20 September to 10 October (more on that here). This is a three-week trading course, designed for an audience of novices, especially cricket fans since much of the further promotion and its merchandise items, as well as the campaign itself is geared at specifically celebrating the IPL relaunch.

It is covering all topics a novice trader could need in order to get better in this complex yet often lucrative area, like fundamental and technical analysis. Although the course has already started, one could still jump on board, as the registration is still ongoing and all the webinars are being recorded.

One of the other activities OctaFX offers is a new quiz format called ‘What’s your cricket role?’. Anyone can take that quiz by following this link and get involved in the promotion.

The ‘Grand Gift Giveaway’ is another item on the programme of festivities that is taking place from 20 September to 15 October. Every participant of this promotion receives a prize ticket for each traded lot on OctaFX platform. After the promotion’s conclusion, during an online draw, one of these tickets will be chosen at random to win one of 20 exclusive OctaFX and Delhi Capitals merch packs. They will include 5 items as well as mini bats with authentic, handwritten signatures of Delhi Capitals cricketers, and jerseys with their digital signatures.

The ‘Grand Gift Giveaway’ finale will take place 18-24 October. The campaign and its programme are now fully viewable in the OctaFX Trading App, including the client’s ‘Trade & Win’ lots and tickets.

Furthermore, OctaFX has a wave of new content planned to be released, saluting the IPL relaunch. For instance, a new series of advertising films will be made available primarily on the Hotstar platform but other online outlets, as well.

The Hotstar service is a platform that specialises in broadcasting cricket matches. During this promotional campaign, a ‘Meet & Greet’ with three Delhi Capitals players will take place on 6 October. An Instagram contest is put in place to determine two lucky participants in the ‘Meet & Greet’. In addition to them, eight of the most successful OctaFX traders will join the get-together with the cricketers. Altogether, 10 people will be attending this event. The selection process started on 27 September.
This year’s VIVO Indian Premier League will conclude on 15 October in Dubai, United Arab Emirates.