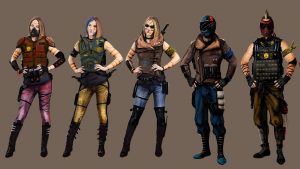 Razor Edge Games received valuable feedback following the weeklong availability of the pre-alpha demo of their upcoming RPG Eden Falling during the Steam Summer NEXT Fest alongside hundreds of other demos. Nearly four thousand users downloaded the demo between June 16th and June 22nd, 2021.

REG is grateful to everyone who joined in on the two gameplay and dev Q&A livestreams. It was a positive experience all around. REG plans to do more dev-hosted streaming events in the near future leading up to the upcoming closed Alpha testing period. You can visit Eden Falling’s Steam page for more info and wishlist it.

In Eden Falling, you are a survivor, chosen by a mysterious benefactor to travel and explore the unforgiving wastelands. Explore alone or with friends, shape your destiny and create your legend.

Will you make your mark on the world or will you just be a mark?

It’s up to you— In the gritty hardtack world of Eden Falling, choices matter. Your game world will change, depending on how you answer questions, travel the lands, and which linear quests you choose to take on– or forego.

Craft high-tech weapons and gear, take on contracts to protect the locals from violent marauders, hunt terrifying ferals (mutated humans), and navigate the merciless politics of a savage new Earth. With seven distinctive factions to garner reputation and infamy among, opportunities for intrigue abound.

As you pass on your experience to the next generation through your companions and offspring, the world you’ve helped create continues to grow and change. Each game will be a rollercoaster of emotions and an adventure you can share with others in the community.

Step into the world of Eden Falling and discover if you have what it takes to survive in a fallen world.