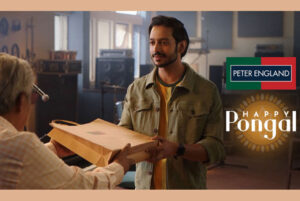 Aditya Birla Fashion and Retail Limited’s Peter England, a leading international menswear brand, has launched an exclusive TVC campaign for the upcoming Pongal festival. The TVC captures the spirit of the holiday season as well as the close tie that exists between father and son.

The commercial is a sympathetic montage set in a festive environment that demonstrates parents’ need to find new methods to engage with their children and form particular bonds with them.

Developed and executed in creative partnership with DDB Mudra South, the central theme of the campaign is ‘Belief in A New Beginning’. The campaign combines the objective of resetting family relationships, festivity, colour, and celebration with Peter England’s wide range of premium quality and stylish festive collections for today’s contemporary men at amazing price points.

Commenting on the campaign, Manish Singhai, COO, Peter England, said, “We are thrilled to launch our new festive campaign ‘Belief in A New Beginning’. The campaign portrays a new relationship between a son and his father after the father takes a small step towards understanding his son’s aspirations. The storyline metaphorically directs us to find the perfect look to celebrate this Pongal festival. Our collection has been designed around the positivity and goodness that festivals bring to our lives. We are determined to curate and offer fashion that enables our consumers to not just immerse in the festivities but also to stand out.”

Saritha Rajagopal – Creative Director, DDB Mudra South, said: “Pongal celebrates optimistic new beginnings.So, to launch Peter England’s Pongal campaign, we captured a moment between a father and his son. While the pandemic took away some jobs, it also presented an opportunity to pursue one’s dreams. With this campaign, we captured an honest conversation between a father and son, who aspires to grow. We signed off with a message for every youngster who is waiting to start on the journey of life.”