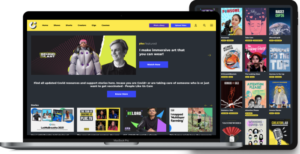 Pluc.TV is a start-to-finish creator economy platform where creators can produce, market and monetize content. With growth on the platform catapulting in 2021, it has hit half a million users from countries like India, UK, US, Canada, Africa, Indonesia, Hong Kong, Mexico and Australia. Pluc.TV has also won Silver for best use of online video at the prestigious WAN-IFRA South Asian Digital Media Awards, second time in a row.

More than 50 million people around the world consider themselves creators today and India’s creator community is expected to cross 100 million in the next 5 years. But there’s an immense power imbalance between platforms and creators, and only a few top creators actually get the most amount of money.

Pluc.TV is creating a parallel ecosystem that puts creators and their premium stories at the heart of everything. Speaking about the year that was, Founder & CEO of Pluc.TV, Tamseel Hussain explains, “With our platform being used by almost 500,000 people this year, we’ve enabled thousands of creators to enter the creator economy, grow and earn their first buck. These include the creators you haven’t encountered anywhere else and we’re so excited to take this growth curve further in 2022.”

From a doctor who wanted to offer credible information during the pandemic reaching millions of people to a group of young students from rural India creating their own short film in less than 60 hours – Pluc.TV was used by thousands of creators to not only produce and share their content but also learn new skills via courses and apply for new gigs.

Head of Creator Relations, Shubham Gupta adds, “Right from storyboards to shooting to production to marketing, we have been able to help thousands of creators. We also launched the ‘gigs’ section on our platform listing paid opportunities to earn, which has helped so many creators gain financial independence.”

With presence at global conferences like COP26, I AM Weekend 21, community-led campaigns at Pluc.TV reached new benchmarks. Head of Partnerships, Niharika Maggo explains, “We’ve been able to help brands access a new stream of creators instead of just relying on mainstream influencers. Our health creators were the most popular in brand interactions. Our direct platform pageviews have hit 7.2 million this year, with multi platform views going over 400 million across channels. We’re so excited for 2022!”

Launched in 2017, Pluc.TV communities today comprise of over 31200 creators from 22 countries with more than 7000 published stories in 12 languages that have reached over 500 million people worldwide.