Real11 Introduces Kabaddi On Their Platform! 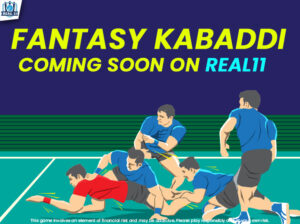 After fantasy cricket, fantasy football and Ludo, the fastest growing fantasy platform, Real11 is proud to introduce Kabaddi on their platform. The fantasy sports organization has already acquired Ravinder Pahal, one of the best Kabaddi players of the nation as the brand ambassador of the company.

Kabaddi, a game that was made in India, is extremely popular in the nation. Introduced in the middle of the 19th century, the game has come a long way and reached billions of people worldwide. Now, with Real11, the fans will not only enjoy the game sitting in the comfort of their couch but will also make money out of it by playing the game virtually with their favorite players.

Like cricket and other games available on the game, Kabaddi will also be a game of skill where the users will have to pick seven players from both the teams, five being the maximum from one team. Based on their performance in real time, points will be awarded and the winner will be announced soon after the result of the match has been announced.

With more than 25 million active users on their platform, it is the most trusted fantasy platform available in India. Now with Kabaddi on board, Real11 aims to extend its family and hopes to have people across the nation to be a part of the organization.

Ravinder Pahal, Brand Ambassador, Real11, said, – “Firstly, I’m thrilled to be a part of Real11 as the company is all set to launch Kabaddi on their platform. A lot of people have wanted to play fantasy Kabaddi for a long time and now they will have the perfect opportunity to play. Kabaddi is extremely popular in our nation and with Real11, I hope more and more people will show interest in the game and a lot of people will be part of the community.

Amit Yadav, Founder, Real11, said – “I’m extremely proud and happy as we are set to launch another game on our platform. Kabaddi is extremely popular and we wanted to cash in and give people what they wanted for a long time now. Ravinder Pahal is a megastar of the game and we also welcome him as the brand ambassador of the game. Together, we hope to reach newer heights and bring glory to the game as it deserves.”