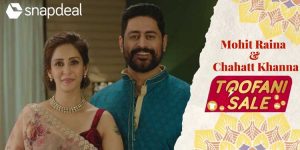 Mohit Raina will be seen ordering various Diwali looks for himself and his friend, played by Chahatt Khanna, a popular TV actress, with popular fashion choices available on Snapdeal.com, his social media handles.

Commenting on the campaign, Soumyadip Chatterjee, Brand Marketing Director, Snapdeal said, “We see the partnership with Mohit as a way to reach & build trust with the Indian heartland audiences, and deliver credibility of our efficacy and brand promise. He is a self-made movie star with humble beginnings and gets huge respect and love from Indian TV & movies viewers, due to his larger-than-life roles in shows like Mahadev and blockbuster films like Uri.”

This festive season, Snapdeal is running regional campaigns and has collaborated with popular social media influencers. Before going live with Mohit Raina, it had campaigns running in Gujarat and West Bengal, with Aarohi Patel and Subhashree Ganguly, that was focussed on Navratri and Durga Puja celebrations. The campaign is currently running on Facebook, Instagram, YouTube & OTTs like Zee5 & MX Player and is being well received by the audience.

Snapdeal has also just wrapped its first  Toofani Sale of the season, where its overall sales volume went up by 98% compared to last year. Sharing analysis from the first sale, it said that nearly 60% of its total orders came from Tier 3 towns. Tier 1 & 2 cities accounted for nearly 26% of orders, while metro buyers accounted for the balance 14%. And men’s, women’s and kids apparel are trending at 224% of last year, while home and kitchen continue to be another strong performer with more than 95% growth over last year’s festive sales.