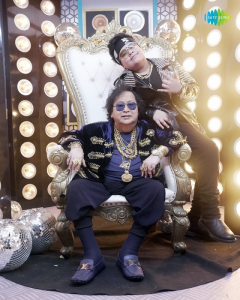 The iconic Bappi Lahiri has had a multitude of his biggest hits with Saregama – India’s biggest and oldest music label. It shares a special relationship with Bappida – cemented through his many chartbusters in the 80’s and 90’s that were released by the label. Tracks like I am a Disco Dancer, Raat Baaki, Pag Ghoongroo, Bambai Se Aaya Mera Dost, Naino Main Sapna, Taaki Taaki, Humko Aaj Kal Hain Intezaar, and many more, continue to stand the test of time and get reinvented by the subsequent generations.

Now taking the legacy of the Lahiri household forward is Bappi Lahiri’s 12-year-old grandson – Rego B, who will be launched by Saregama in their upcoming kids’ single – Bachcha Party.

Rego B has music in his blood, given his rich family history, he has the style and energy of his grandfather in his heyday, and he has made the song his own.

The racy energetic track – composed by master composer Shameer Tandon, has the young talent singing and featuring in the video, and doing some snazzy hip-hop moves. The song itself is an energetic racy party number and has Rego B also pulling off some cool rap, that talks about all things the Generation Z of Bachchas are totally into. The video has been directed by Remo D’souza Entertainment PVT. LTD.

Bappi Lahiri is understandably excited about Rego carrying on the family mantle with Saregama. He says, “I am really happy and proud that my grandson is starting off his career in music so early on. Bachcha Party is a song that suits his personality and style and is best suited for him thanks to Shameer Tandon who discovered the spark in Rego & has composed the song that suits him best. And for a record label as prestigious as Saregama to launch him makes it doubly special, since my association with Saregama goes back to many decades. Rego B is diligent and an eager learner, and I am excited to see what opportunities lie in store for him. This is the fourth generation, my daughter Rema first cut her album Little Star in 1987 & she debuted with a Platinum Disc now her son Rego B is again with Saregama for his debut so history repeats. I humbly ask all my peers and fans to bless him and shower him with the same love they have always given to me.”

Bachcha Party is all set to release on the official Saregama official Youtube channel and all leading music streaming apps, this Thursday on 7th October.