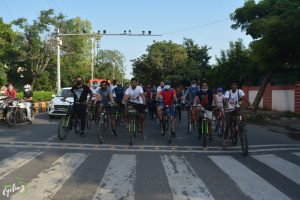 Over 100+ cyclists converge for a Freedom Ride to celebrate the resurgent ‘Atma-Nirbhar Bharat’ at Ahmedabad today on the ocassion Gandhi Jayanti. The Freedom Ride was being organised as part of the Azadi ka Amrut Mohatsav celebrations. It was a joint initiative of Ahmedabad Municipal Corporation (AMC) and Smart City Ahmedabad Development Limited (SCADL).

The Azadi ka Amrut Mohatsav aimed to celebrate the betterment of lives enabled by technology. The rally began at 7.45 am for participants from Happy Streets, Law Garden, on 2nd October 2021 and a Photo opportunity of Chief Guests at Gandhi Statue, Income Tax Circle at 8:30 am.

Participants were treated to a thrilling experience of experiencing the cultural heritage of Ahmedabad through MYBYK rides.

Despite registration being optional, more than 1000+ cyclists had registered for the event.

“We are glad to play an important role in this historic celebration. With a network of 300+ Hubs, 2000+ Cycles and 50000+ Users, MYBYK is honoured to empower this ride,” said Arjit Soni, CEO and Founder of MYBYK.

Those users who did not have a cycle can participate in the ride using MYBYK bicycles. All they need to do was to download the app, locate the nearest MYBYK Hub, Unlock & Ride with rentals starting at just Rs. 2/hour.