ZEE5 Global’s newly Launched ‘On The Road’ Campaign a hit with youngsters, influencers and families across London 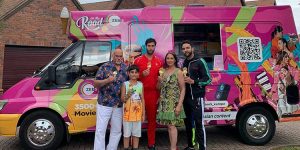 ZEE5 Global, the streaming platform for South Asian content, recently took to the streets in an iconic ice cream van to serve Londoners their favourite soft serves and familiarise them with amazing stories from the Indian subcontinent. The campaign, titled ‘On The Road With ZEE5’, was a huge success, drawing in crowds ranging from the young to the young-at-heart.

Spread over 3 days, with the final day being the busiest around Kenton, Kingsbury and Harrow after the buzz it created. ZEE5 Global’s brightly coloured van also toured East, West and Central London, to serve a variety of ice cream in exotic flavours named after their shows such as ‘Dial 100’, ‘14 Phere’, Qubool Hai and more, topped off with chocolate sauce, strawberry sauce and mixed sprinkles.

The van made special stops to engage with Londoners like TikTok influencer Salwa Aziz and her family and local councilor Ajay Maru, who not only appreciated the free ice cream but also loved the insights into the world of South Asian entertainment. Many young Londoners loved the idea of a global yet deeply South Asian platform, which they and their families could connect with to keep in touch with their South Asian roots.

Attracted to the brightly coloured van and its catchy jingle, large crowds of Londoners in Southall, old Southall and Broadway, and local businesses such as Mongas and Lyca Radio  came up to check out the van. Lyca Radio also featured ZEE5 Global on its radio station, intriguing many people who then came looking for the ZEE5 van! Londoners going for dinner were also glad to grab a soft serve after their meals.

Youngsters on their way to Asian cafes and restaurants also popped by to check out what ZEE5 had to offer. Young influencers Fizzah Sayed, Karan Paglani and Nissa Hussain and her family were also extremely excited to not just eat ice cream but also truly make a connection with home through the array of South Asian stories on ZEE5.

Archana Anand, Chief Business Officer, ZEE5 Global, said, “We’ve had such a fun weekend meeting and interacting with people of all ages across London. The city’s diversity and spirit resonate deeply with everything that ZEE5 stands for, and we look forward to continuously bringing Londoners their much-loved tv shows and movies from South Asia. With the phenomenal response to this campaign, we look forward to bringing more such fun initiatives from the World’s Largest Streaming Platform for South Asians!”