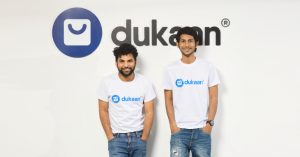 Dukaan has secured $11 million in a pre-Series A round headed by 640 Oxford Ventures, with participation from current investors Snow Leopard Ventures, Lightspeed Partners, and Matrix Partners India.

Venture Catalyst and new venture firms HOF Capital, Old Well Ventures, LetsVenture, 9Unicorns, as well as a number of high-profile professionals, including Oyo’s Ritesh Agarwal and Carl Pei, Co-founder and CEO of Nothing, took part in the investment round.

Dukaan, a Bengaluru-based no-code platform, was founded in June 2020 by Suumit Shah and Subhash Choudhary to make it easy for anyone to establish an ecommerce website in a few minutes and scale it on the internet.

“We founded Dukaan because we saw small businesses and first-time entrepreneurs struggling to digitise and make their presence online. We became obsessed with the idea of making the most affordable, easy-to-use, mobile-first commerce platform in the world,” said Suumit Shah, CEO and Co-founder, Dukaan.

Speaking about the investment, 640 Oxford Ventures commented, “Suumit and team have demonstrated a unique ability to understand what SMB’s need to be successful digitally and then ship product at incredible velocity to solve those pain points. This round of funding will further enable Dukaan to build meaningful products. We are thrilled to partner with Suumit and the Dukaan team on their path to becoming a generational company.”

Akshay Bhushan, Partner, Lightspeed, added, “There is a massive white space opportunity to service the commerce needs of India’s 100M+ small businesses and the Dukaan team with its strong product orientation and deep knowledge of the small business user is ideally positioned to lead the creation of new categories of commerce businesses in India.”