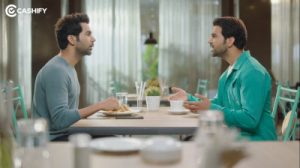 Cashify, India’s leading re-commerce marketplace launched their first TVC with National Award winner Bollywood actor Rajkummar Rao as the brand ambassador. Ever since Cashify started its journey in 2013, its vision has been to conquer India’s $4 billion used smartphone sector by making the sale of old gadgets a simple affair by helping customers with price discovery and cash in hand. Conceptualised and executed by in-house team & MotifGlobal, the 30-second creative uses humor, wit and clear messaging, drawing awareness among the prospective and existing customers about the ease and convenience of selling old or used mobile phones using Cashify for instant cash and free home pick-up.

The campaign comprises two films. The first film opens up with a conversation between two brothers, one being stuck in a real life situation, struggling to recover the loan. That is when Cashify is stitched in the narrative as a solution highlighting various value propositions to the users including: trust, convenience, maximum value, safe & hassle-free, free pickup and instant payment. In the second ad, the protagonist is asking the audience if they are planning to buy a new phone and what they will do with their old phone. We all have that temptation of buying a new smartphone. And selling the old phone to help fund the new purchase is always a great option. But the question is how to get the best resale value for your phone? The protagonist explains step-by-step how Cashify simplifies the process of managing your devices by helping you with price discovery, cash in hand and other such features in a streamlined and efficient manner.

Earlier this month, the company announced that it has roped in Rajkummar Rao as its first brand ambassador to promote its products and services across offline and online mediums. The company will run this campaign across Television, OOH, Radio and Social media channels for the upcoming months making it a 360 degree campaign.

Commenting on the announcement of the campaign, Puneet Arora, Head-Content Strategy of Cashify, said, “As the country went into a lockdown for months, the need to have a smartphone with internet connectivity and supportability of apps became a necessity. Be it keeping up with jobs or education, digital became the new normal. From online classes to work from home, Indians couldn’t make do without a gadget in hand. And for those who couldn’t walk into a showroom and grab a new smartphone, refurbished devices came as a sigh of relief. With this campaign, we are trying to reiterate how Cashify makes selling or buying phone hassle free. We are on our goal to transform the way people sell their old gadgets online. We are confident that this campaign will find resonance and preference amongst its audience and will reach out to many more consumers and strengthen our positioning of being the most trusted re-commerce partner  in India. Rajkumar as a brand ambassador is a strong face to our brand philosophy. We are looking forward to a multi-year engagement with him.”