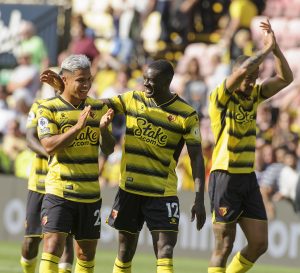 With the advent of the world famous English football Premier League; Bolo LIVE, India’s first home-grown and fastest-growing social live-streaming platform today announced the partnership with Watford FC, English professional football club based in London to promote and drive engagement amongst the Indian football fanatics on the Bolo LIVE platform across regional languages.

The partnership aims at promoting and driving engagement around Watford FC’s content, highlighting the team’s performance at the ongoing English Premier League through match snippets and exclusive bytes. The content is specially curated and localized for the Indian football lovers on Bolo LIVE platform in Hindi. Also, there will be an exclusive LIVE streaming sessions on the Bolo LIVE app by sports experts from Watford FC to have a heart-to-heart with football fans.

India too has its legions of football lovers and estimates are that 238 millions of them watched football matches in 2018/19. The Premier League remains by far the most watched and supported football league with an awareness level of 79 per cent amongst football fans, according to a Brand Finance research report. This year, the English Premier League is back with the 2021/22 edition that kickstarted on Friday August 13, 2021.

Commenting on the partnership, Varun Saxena, CEO and Founder, Bolo LIVE said: “We are excited to partner with Watford FC and are elated to be part of the iconic English Premier League. We are confident of creating some magic through the ongoing football extravaganza with exclusive content from Watford FC in form of exciting live sessions and videos. We are delighted that the Bolo LIVE app is becoming the platform of choice for the global players to expand their market reach in regional markets and local languages.

For sharing all the football-led content and driving engagement with the users, Watford has activated official handle #WatfordFC to share all key content updates with Bolo LIVE’s language audiences. The account will also give users access to match schedules and other important updates related to the game. It will also let its users enjoy exclusive behind-the-scenes match snippets, along with previews and reviews of the match.

Commenting on the partnership , Watford FC Commercial Director Paul O’Brien said: “We are happy to join hands with made-in-India social live streaming platform, Bolo LIVE. Through this partnership, we aim to bring unique and localised content for football lovers residing in India. Throughout the year, we hope to engage with fans and help them start following our club both on and off the pitch.”

With 140 years of history, Watford FC is recognised as the Original Family Club. The club takes great pride in its history. Based in London, the club was established in 1881. We hold a strong connection with our community both domestically and internationally. After a surprise relegation at the end of the 2019/20 campaign, the club immediately gained promotion back to the Premier League the following season.

Bolo LIVE recently rebranded itself from Bolo Indya to reiterate the company’s vision of being a horizontal platform with a global footprint and to be the largest made-in-India social live streaming platform. Bolo LIVE was launched in May 2019 with the aim to enable a strong ecosystem of creators, helping them to remain financially independent. Bolo LIVE launched its live-streaming feature in November 2020 to empower new age, amateur creators along with professional creators to open their income avenues and provide them with an opportunity to learn and earn through digital initiatives.