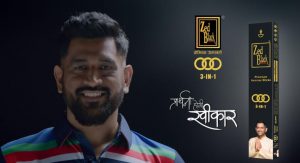 Early this month, a photo of former India captain Mahendra Singh Dhoni wearing a throwback Indian jersey went viral on social media. Fans and followers couldn’t stop smiling after seeing the great wicketkeeper-batsman in the throwback jersey as soon as it was uploaded on Instagram. Finally, the wait is over.

Zed Black, one of India’s largest incense sticks manufacturer has launched its new campaign which will have their brand ambassador Captain Cool, MS Dhoni in a conversation with his audience reminiscing his demeanor and motivating approach towards youth of the country. Zed Black will soon unleash its biggest-ever lineup of star-studded brand commercials which are aimed at targeting consumers across the nation and giving Zed Black the opportunity to engage the youth for the cause of Prarthna Hogi Sweekar. Along with the existing celebrity ambassador, Bollywood Superstar Hrithik Roshan for Manthan Dhoop, Zed Black will continue to emphasize its hold on the Indian agarbatti sphere. Conceptualized by Oberoi IBC, this integrated campaign for Zed Black 3-in-1 Agarbatti aims to get India praying to the mantra #prarthnahogisweekar.

Dhoni announced his retirement from international cricket on 15th August last year and since then his popularity around the world has not diminished. The boy from Ranchi, who made his ODI debut in 2004, who changed the face of Indian cricket with his calm demeanor, sharp understanding of the game, and astute leadership qualities is still reigning the hearts of cricket fans as the pictures in the retro jersey are spreading like wildfire.

Ankit Agrawal, Director & Partner, MDPH shares, “Zed Black Agarbatti, is amongst the top 3 brands in its category in India which stands as a reflection of its ‘go getter’ spirit, devotion, resilience, belief and prayers. MS Dhoni, who is staunch believer of tranquil state of mind that helps in focused efforts and better results, complements well with our brand value. Zed Black 3-in-1, which is a market-leader, creates an atmosphere of purity, hope & positivity that helps maintain a balance. Zed Black is elated to give MS Dhoni’s fans a moment to cherish by unveiling the TVC with the retro jersey look exactly after one year since he announced his retirement from International cricket on 15th August.”

Choreographer-filmmaker Farah Khan has directed Indian cricketer MS Dhoni for this commercial. The legend also got a new ‘faux-hawk’ cut which also became a topic of discussion on social media by celebrity hair stylist Aalim Hakim. Ace photographer Daboo Ratnani has wonderfully captured all of Dhoni’s looks for the TVC campaign.

“It’s Zed Black’s journey of hope, success, prayers and innovation that drew me to the brand. To be the face of a brand that sends out a beautiful message like Prarthna Hogi Sweekar, giving people hope and strengthening their beliefs is what resonated with me. Their new campaign is inspiring and motivating,” said MS Dhoni.

“Zed Black, has gone beyond just the advertising jingle, with the latest extension of its flagship ‘Prarthna Hogi Sweekar’ campaign being commissioned into mini-shorts indicating the thought that prayers will be answered. The new campaign with MS Dhoni has a moral underpinning that reflects the importance of family praying together, workplace worship, community prayers, the simple love of imparting the habit of praying amongst kids and love for the country,” shared Anshul Agrawal, Director & Partner, MDPH.