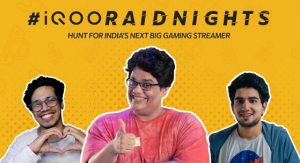 Gamers and streamers are burgeoning in the country and the numbers are increasing exponentially. This new behavioural change is a trend watched closely by platforms and brands since the audience for these streamers are the most coveted – youth. Engagement rates are unique to just this medium.

There are stories of gamers and streamers from modest backgrounds who have made it big by being good at two things – esports and entertainment. So, what is a “raid?” A raid is when a YouTuber/Streamer with a significant following, asks his/her viewers to go and watch another creator’s live stream. Case in point – GamerFleet. A young man from Haldwani, Uttarakhand who was streaming to double digit audiences when he was ‘raided’ by Samay Raina. After the raid, he continued to grow organically not just because of his personality and collaboration with Samay Raina and Tanmay Bhat. Cut to a few months later and GamerFleet has over a million subscribers. This is the beauty of a ‘raid’.

So Raid Nights was born. This is the brainchild of Tanmay Bhat in partnership with iQOO – a phone company that puts the gamer before the game. The idea was executed by OML Entertainment with technical partners – Sky eSports. This property was only possible by the power of the platform that is YouTube. Tanmay Bhat, Samay Raina and GamerFleet have been online every Friday evening for the last one month with their new live-streaming property, iQOO Raid Nights. The three content creators (Also known as raid bosses) presented a once in a lifetime opportunity to aspiring gaming streamers where they would raid the YouTube channels of upcoming streamers asking their subscribers to tune in and watch the live-stream of the channel they would raid, resulting in the aspiring creators seeing increase in live-streaming numbers like never before.

Tanmay Bhat – “Raid Nights is something that I’ve always wanted to do at scale. It was great to see brands like iQOO and YouTube supported this property. The creativity that some streamers bring to the table is something that the audience must discover.”

Samay Raina – “Live Streaming suddenly grew during COVID quarentines and many creators tried to showcase their characters and personas on stream although they couldn’t reach out to more people. I’m glad iQOO Raid Nights helped these creators gain a massive amount of reach and an opportunity to showcase their talent. It was a great feeling watching people showcase their unique, unrecognised talent everytime we would raid them. Much love to iQOO for supporting us with this property.”

GamerFleet – “One day I was just randomly streaming with about 500 views and suddenly it shot up to 5,000. That was when Tanmay Bhat raided me as a part of the initial stages of Raid Nights a few months ago. This helped me garner a lot more reach than usual and increased my subscriber base. This is exactly what iQOO Raid Nights did with all the streamers who were a part of it and I’m glad a lot of channels got discovered.”

Mechanical Pandey (Winner) – “iQOO Raid Nights helped me quite a lot in terms of expanding my reach and discovering my creative abilities I’d really like to thank all the people who voted for me, and primarily Tanmay-bhai, Samay-bhai and Fleet-bhai for tuning in to my channel in the middle of all the 1500 channels that were streaming in the week I had participated, and giving me an opportunity to entertain and bring smiles on about 1 lakh people’s faces across 2 streams. I’m super excited to get my hands on the new gaming setup that I’ve won.”

Gunjan Arya (CEO, OML Entertainment Pvt. Ltd.) – “We are always on the lookout for upcoming talent that we can support, and have been bullish on online gaming for some time now. We’re super thrilled to have partnered with iQOO and YouTube in a way that is not only rewarding for the brand and the platform but for the online gaming space as a whole. The power of Creators + Brand + Platform really came together for a proper OP moment. Tanmay’s guidance and the super Samay and GamerFleet to boot have been invaluable collaborators. We came across a lot of new streamers including the incredible Gamer Mummy through the campaign and we will continue to do a lot more of this.”