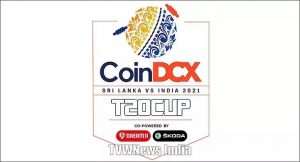 In its first-ever sponsor association with a cricket team, CoinDCX, India’s largest and safest cryptocurrency exchange platform, becomes the Official Overseas Sponsor of Team Sri Lanka in July, as announced today. The Sri Lanka vs India T20 series is set to begin in Sri Lanka on 21 July 2021. It is a part of the Indian team’s tour to Sri Lanka and will feature three One Day Internationals (ODIs).

The Sri Lankan team will compete with the Indian team on home grounds after a period of three years and anticipation is high with the limited-overs series being seen as an important tune up for both teams in the run up to key events such as the World T20 later in the year. India will be led by Shikhar Dhawan in what promises to be a series that will be an opportunity for new talent to break through. Incidentally, it’s also a breakthrough association in terms of sponsorship with CoinDCX breaking new grounds in becoming the first crypto brand to come on board as a cricket sponsor.

The excitement around the T20 Cup has always been unparalleled both the countries and is expected to generate high viewership among the young audience while cryptocurrency as an asset has seen an uptick in popularity among young investors. With this sponsorship, CoinDCX appeals to the millennial & Gen-Z populations that have taken a liking to the crypto space, and are most likely to consider investing in crypto assets. It provides CoinDCX with an excellent opportunity to generate extensive visibility and boost brand recall amongst the young viewer base. This will further help the crypto assets exchange to tap into potential investors.

With its vision to make crypto easily accessible to Indians, CoinDCX has been a pioneering player in the crypto space in India. The sponsorship of Team Sri Lanka is a significant push by CoinDCX towards creating awareness and educating retail investors around the country about new-age assets. In addition, targeting young cricket fans in India will help them position their brand strategically to grow further.

Sumit Gupta, CEO & Co-founder of CoinDCX said “The CoinDCX team is very excited to be the Official Sponsor of Team Sri Lanka for upcoming Sri Lanka vs India T20I series. Cricket is one of the revered sports in India. We are very excited by the prospects of this sponsorship, and we see a lot of potential in the under-penetrated crypto-assets market in India. Cricket – particularly the T20 format- offers excellent synergy for CoinDCX as we aim to reach out to more users through this association. Being the country’s largest and safest cryptocurrency exchange, we aim at accomplishing new heights just as the Indian Cricket Team.”

Arvind D’Silva, Chief Executive Officer of Sri Lanka Cricket said: “It’s a delight to have CoinDCX Go as team sponsor for Sri Lanka for the upcoming Sri Lanka v India T20I & ODI series. SLC is thankful for the support our partners have given us throughout, and as we get a new season underway with a clash that will feature some of the most exciting young talent around in world cricket, we are confident of a large audience tuning into the action. With the backdrop of a pandemic affected and challenging season now behind us, we are eagerly”