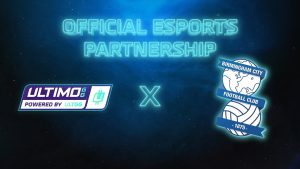 ULTGG has announced a two-year collaboration with EFL Championship football club Birmingham City F.C. to assemble a new esport team for the club, host tournaments, events, and boot camps. Setting off initially as an esports events company, Ultimo has been functioning for five years now and decided to change its direction to the digital side to bring diverse communities all around the globe together. Understanding the broken nature of the industry, Ultimo’s COO, Ben Husted, constituted a team led by Co-founders William Henry and Tobias Gooden to bring ULTGG into existence – a platform that will provide all gamers and content creators with a fair chance to earn. Calling it a “dream” to work with Birmingham City F.C., Ben has expressed his gratitude towards the club for understanding their aims, trusting their vision, and welcoming them wholeheartedly.

ULTGG also launched the first NFT into space by launching a ledger filled with its ULTGG tokens into space along with the first ULTGG NFT. The Market Cap of ULTGG Token reached an impressive $25m within 10 minutes of launching. The Ultimo GG platform NFT marketplace allows creators to not only sell NFTs for FIAT & ULTGG but also mint new ones directly. The company released its cryptocurrency in early July and amassed 13000+ holders within the first month itself. Its unique ULTGG gaming token has played a vital role in the success of this venture. It is considered revolutionary in democratizing esports and empowering gamers & content creators around the world to build a better future. It is a currency that could be used across the entire Ultimo GG ecosystem and be exchanged for real money.

The team behind ULTGG has thrived on developing a versatile platform that caters to gamers’ needs and rewards them for everything they do – from any action they take to every game they play. They have focussed on developing a user-intuitive interface that enables easy navigation for players, helps them find their favorite games, and bag large prizes and rewards. To discover raw esports talents, Ultimo GG aspires to become a one-of-a-kind, complete framework, enabling the stars of tomorrow to shine under its banner.

Along with its utility token, the platform will also devise an NFT marketplace that will give creators a chance to trade NFTs and create new ones directly. It could also be used for streaming purposes, and players would learn from coaches in boot camps, one-on-one training, and tutorials. In the simplest terms, NFTs transform digital works of art and other collectibles into one-of-a-kind, verifiable assets that are easy to trade on the blockchain. The sales volume for NFTs hit $2.5 billion in the first six months of this year, up from a total of $13.7 million in all of 2020. This rapid Increase is driven by recent headlines involving the growing interest of celebrities and businesses looking to leverage this cutting-edge technology. From ‘Acker’, the world’s largest fine and rare wine auction house announcing its first-ever NFTs from Burgundy, ‘Beeple’ selling his digital NFT art for $69M, or the listing of first ‘Publicly-traded’ NFTs investment vehicle, NFT Investments plc in London, 2021 will forever be remembered as the year of NFTs.

ULTGG offers a range of services from its platform. From being a gaming platform to providing a fair space to crypto players, content creators and anyone who wants to contribute to the community, the scope with ULTGG is unrestrained. It is a boon for individuals who have been waiting for a chance to make real money using their unique talents, this groundbreaking platform allows the users to change ULTGG into fiat and make a career out of their talents. Progressing rapidly, looking at the growth of ULTGG in such a short time, it is safe to say that it will complete the goals enumerated in the roadmap pretty soon.

The company has already released it’s customer-centric tokenomics that includes 12% transaction tax, out of which 5% will be sent to liquidity, 2% each would be used for development and marketing and another 3% will be redistributed to holders. The team has also released an integrated, hyper secure ULTGG wallet to help holders facilitate frictionless transactions at all times. 10% of the wallet transactions will go into marketing, whereas 5% will go into development. The project is keen on giving back to its community for which 5% of it will go into charity.

Through this platform players can prove their skills in weekly tournaments featuring the most prominent gaming titles and win killer prizes featuring high-end hardware and exciting money rewards. Tracking progress and being abreast with gaming news and the latest reviews is also made easy through ultimo’s leaderboard and content sharing feature.

Furthermore, ULTGG will host the ‘ULTGG Series’ tournament. The competition which is going live soon will attract players who will compete in a series of 5 different games where the winners will take home the total prize money of £50,000, a league split into various levels, where any gamer, at any level of proficiency and skill, would be able to participate in fierce contests sponsored by big brands and take home large prizes.