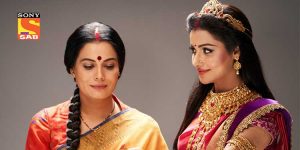 The show will demystify the meaning of true devotion and the significance of self-transformation. The show illustrates a transformative journey of its characters, where they will learn to find a balance between devotion and spirituality in their daily lives.

Set in Ratlam, the Toshniwal parivaar is like every other Indian household facing challenges and struggles of daily living and wishing for a prosperous life. Savita Toshniwal (Geetanjali Tikekar) and her husband, Niranjan Toshniwal (Nasirr Khan) run a namkeen (snack) business which has been suffering losses resulting in financial problems at home. Savita, a housewife and a true devotee of Goddess Lakshmi, feels the constant urge and responsibility to save her entire family from an impending downfall. Being a firm believer of divine miracles, she does everything in her capacity to please Goddess Lakshmi. Savita leaves no stone unturned to change their poor fate and expects a miracle to save her from her struggles and when it doesn’t manifest into anything, her grouse is – ‘When will Goddess Lakshmi bless her house?’

Her constant grievance makes Goddess Laxmi (Chhavvi Pandey) take on a human avatar, land on Earth to enter Savita’s life and guide her towards a journey of self-transformation. Adding to the incredible ensemble cast of Geentanjali Tikekar and Chhavvi Pandey, is Tanisha Mehta, who will be making her television debut as Shreya, a young, smart yet humble girl who hails from a rich family in Ratlam. Shreya will play a pivotal role in Savita’s life as she realizes and discovers the true meaning of devotion, righteousness and wisdom.

Neeraj Vyas, Business Head – Sony SAB “We at Sony SAB have been steadfast on our vision to be different, and our new show, ShubhLaabh – Aapkey Ghar Mein is a step in that direction. Challenging the norm has become a mainstay for us and even as we bring our new show which walks a thin line between ritualism and self-transformation, we choose to do so without any negative drama. Instead, in the true spirit of what Sony SAB is known for, we want to engage, entertain, encourage and enlighten the audience and try to make this world a happier place through the entertainment we provide.”