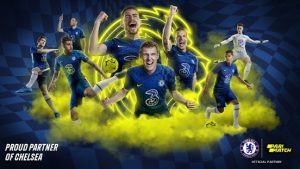 PMI, a service company providing tech, marketing and communications expertise to betting and gambling operators in the international markets, such as Africa, Asia, Europe, and Latin America, is pleased to announce the ambitious partnership agreement between Parimatch Tech and one of the world’s most famous football clubs, Chelsea. England’s most successful football club in the modern era will become Parimatch’s partner for the next three seasons.

Parimatch will use Chelsea’s bold and ambitious brand and will utilise a wide array of digital, social and logistical assets to create mutual branding opportunities.

“Chelsea’s distinct flair, determination, and passionate spirit are a perfect complement for Parimatch’s sporting enthusiasm and ambition. Being named an official partner of the European Champions for 2020/21 is a huge honor and responsibility for the brand we represent globally. Fortunately, PMI is all about reaching new heights and unwinding emotions, and we’re really looking forward to the next three years of this collaboration! Because two strong brands are accustomed to winning in style and striving for success, we at PMI are certain that this collaboration will bring excitement of the game to our customers and partners, and, in turn, to the millions of football fans worldwide,” says Anton Rublevskyi, CEO at PMI.

“Both Chelsea and Parimatch strive for greatness. We are bold, ready to innovate and, most importantly, we were both born to win. Last year was immensely successful for Parimatch as they expanded and opened new markets, while launching several game-changing projects. Chelsea also showed its excellence, becoming European champions for the second time in our history! We are excited and proud of this partnership and the opportunities it brings,” Guy Laurence, CEO at Chelsea FC, has commented news about fruitful partnership with Parimatch Tech.