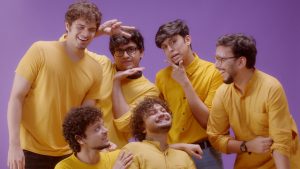 The stage is all set for the iconic comeback of India’s biggest music festival with a new title partner, the Mahindra Group and performances by an incredible motley of rock bands. It has been re-christened as Mahindra Independence Rock, a.k.a. Mahindra I-Rock, and brought forth by its founder Farhad Wadia along with Hyperlink Brand Solutions and Paytm Insider. Further, Jawa Yezdi Motorcycles, ride partner for the event this year, had presented Tomorrow’s Headliners, the country-wide digital band hunt and now the festival has announced the winning band who will be opening the act of the night.  The winning band, Bombay Bandook – selected by an esteemed panel of judges is all geared to kick off this edition of the legendary rock festival at Mumbai’s Bayview Lawns (Princess Dock, Mazgaon).

Since its inception in 1986, the festival has served as a seedbed for underground rock talent seeking national and international presence. In fact, the previous editions have witnessed it discover young bands like Demonic Resurrection, Bhayanak Maut, Motherjane, and Agnee alongside Indus Creed, Pentagram, Parikrama and Zero, turning them into powerhouse legends of the Indian rock-and-roll scene. Intending to keep this tradition alive, this year’s edition of Mahindra I-Rock conducted an online band hunt for emerging Indian artists through ‘Tomorrow’s Headliners.’

This digitally-run contest saw aspirants from across the length and breadth of India and more than 100 bands battled it out to be in the finals.  The top 3 amongst them moved to the final round, from which Bombay Bandook was selected as the Band Hunt Winner. The opening act by Bombay Bandook will be performed on the Jawa Yezdi stage. Meanwhile, I-Rock alumni and notable names deeply rooted in the Indian rock scene and the music industry at large made up the panel of judges, each bringing a unique perspective to the contest: Hrishikesh Kannan (National Brand Head for RadioOne India), the legendary vocalist for Brahma, Devraj Sanyal (now MD and CEO of Universal Music Group, India & South Asia) and Vinay Venkatesh, the former vocalist for Bhayanak Maut, a band discovered on the I-Rock stage.

Talking about the band hunt, V.G. Jaishankar – Managing Director of Hyperlink Brand Solutions said, “Identifying and empowering homegrown talent and nurturing a creed of the Indian rock fraternity has been an essential part of this festival’s legacy. Which is why it was heartening to see the overwhelming response from rock-and-rollers from every nook and cranny of the country for this year’s edition. At the same time, I believe we couldn’t have had a more perfect panel of judges to truly recognise these talents and select a band deserving of the Mahindra I-Rock stage this year!”

Ashish Singh Joshi, CEO, Jawa Yezdi Motorcycles, stated, “It gave us immense pleasure to present Tomorrow’s Headliners, the nationwide digital band hunt for Mahindra I-Rock. Jawa Yezdi motorcycles have always been about the spirit of adventure, exploration and new discoveries. Powering this band hunt resonates perfectly with our ethos as it gives a stage to young talents from across the country, enabling them to showcase their talent and give tough competition to each other in becoming the winner of this contest.”

On winning the band hunt Sannidh Shah, Founder of Bombay Bandook said, “I-Rock was one of those festivals that we’ve been hearing about since we were in school. All our favourite indie scene regulars have been a part of it, so to be able to do the same is really cool. And winning the contest made that possible, giving us the opportunity to grow our audience even more. So, we couldn’t have been more excited to be the opening act on the evening of its return!

Bombay Bandook is here to stay, win your hearts and grow together with the scene. They’re #TomorrowsHeadliners.”

As winners of the band hunt, Bombay Bandook will get the dream opportunity to perform alongside Mahindra I-Rock’s line-up of cult bands, such as Pentagram, Indus Creed, Parikrama, Parvaaz, and more, making the festival’s resurgence a grander-than-ever affair with the rock genre.