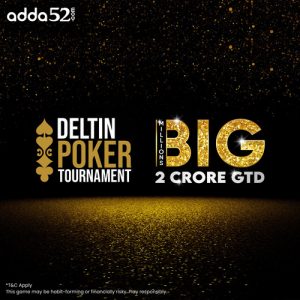 In addition to the DPT, Adda52.com is also coming back with the 7th edition of the Big Millions tournament with a whopping prize pool of INR 2 Crore GTD. The tournament will commence on 3rd November and conclude on 6th November. The final table of the event will be played on 12th November aboard Deltin Royale Casino in Goa and streamed LIVE. The finalists of Big Millions will get a free 3 nights and 4 days stay in Goa to play on the final table to win INR 2 crore GTD. The game will be played live at the Deltin Royale casino on 12th November.

Players can qualify for both DPT and Big Millions by participating in satellite, step-satellite and also through freerolls. The highlight of the DPT tournament series will be DPT High Roller–a special treat for High Roller fans.The event is scheduled to take place on 10th – 11th November with buy-in of INR 1.10L and the highly-anticipated Main Event will be held from 12th-14th November with a buy-in of INR 45K.

Speaking at the launch event,  Krishnendu Guha, Chief Revenue Officer, Adda52.com said, “Poker is a rising sector in India and Adda52.com is committed to provide the best gaming experience offerings to all the poker enthusiasts in the country. Our legacy products such as DPT and Big Millions are an ideal fusion of the online and offline worlds. We need such tournaments where players can eagerly look to participate, experience the thrill of the game and win huge. We have no doubt that India will soon witness a larger number of highly skilled poker players . The launch of tournaments like DPT and Big Millions is our cognizant effort to keep poker enthusiasts excited and entertained at all times.”

In the previous edition of Big Million held in April, Bengaluru-based IT professional, Avinash Koneru, won the tournament and was awarded with prize money of INR 31,63,652. He qualified for the event by winning the satellite event for a buy-in of mere INR 1100. Avinash’s rags to riches story turned out to be revolutionary and inspirational for the budding poker enthusiasts in the country.

India’s largest poker destination, Adda52.com and Asia’s largest floating casino Deltin Royale came together to form the DPT in 2016. The first edition of the tour was held in January and boasted a INR 1 Crore guarantee for the main event. This was followed by a six-day long poker carnival in November. In the last edition of DPT, Sumit Lalchandani won the DPT Main Event and was rewarded with a prize money of INR 35.64 Lacs from the total pot of INR 1.89 Crore. Along with him, Aayush Arya also made his mark in the DPT High Roller event where he got INR 36.64 Lacs from the total prize money of INR 1.65 Crore.