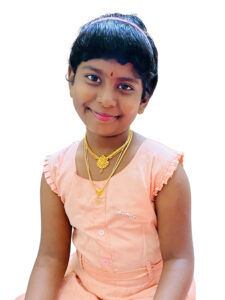 To promote the fundamentals of hand hygiene from a child’s earliest years and to redefine the ABCs of education, Lifebuoy has partnered with Vishalini NC, one of the youngest patent holders in India, as one of the H for Handwashing CEOs for India. All the H for Handwashing CEOs have been handpicked – they are children under the age of 12 and have been chosen due to their commitment towards their community.

7-year-old Vishalini NC, a Tamil Nadu resident, and one of the youngest patent holders in India, received the Pradhan Mantri Rashtriya Bal Puraskar Award from Prime Minister Narendra Modi in recognition for her noteworthy achievements. She is a class 2 student at the Delhi School of Excellence in Attapur, Telangana, and she won this recognition for inventing the ‘An Automatic Multi-Functional Life Rescue Flood House’ which prevents drowning during floods.

The H for Handwashing CEOs will be equipped to take the message of importance of hand hygiene forward using Lifebuoy’s decade-old proven behaviour change material, including handwashing games, posters, comic books, handwashing steps video, hygiene kit, to enable them to spread the important message.  Sanjiv Mehta, CEO & Managing Director, Hindustan Unilever Limited said, “Lifebuoy’s purpose has always been about preventing illness by promoting good hand hygiene through handwashing with soap. On this Global Handwashing Day, we’re incredibly excited to recognise the fundamental part children can play in spreading the message that H must stand for Handwashing. Through the power of peer-to-peer learning, we hope to inspire more kids to rise and change the world’s handwashing behaviours.”

Having already reached over 12 million school children with educational material that aims to improve handwashing behaviours, under Lifebuoy’s H for Handwashing campaign, these new CEOs will be accelerating the impact through peer-to-peer learning and calling on schools to integrate hygiene into national curriculums.

This GHD, Lifebuoy is harnessing the power of peer-to-peer learning within the context of early childhood learning. Studies have shown that when children teach other children, they are more likely to remember the information. Numerous studies have shown that children are more likely to change their behaviour when influenced by others, with one study[i] finding 59% of students changing their behaviour after being influenced by their peers. Therefore, Lifebuoy is calling on young changemakers to take on the mantle of H for Handwashing Chief Education Officers (CEO) to inspire and cultivate a new generation of hand hygiene ambassadors.

For decades, schools have been Lifebuoy’s most impactful touchpoint. The brand has reached over 60 million children through their flagship schools programme, teaching children from all backgrounds about the important habit of handwashing with soap. The H for Handwashing CEOs will be visiting schools to spread the message of importance of handwashing with soap to thousands of children nationwide.