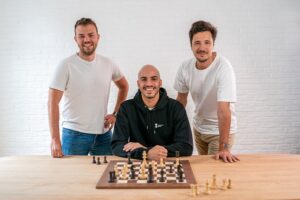 Immortal Game, a company launching a web3 chess platform and marketplace, announces the successful raise of its USD 12 million Series A round.  Led by TCG crypto, the round includes several other leading tech and entertainment VC specialists – Cassius, Greenfield One, Sparkle Ventures (supported by the Sandbox Founders and Animoca Brands) Kevin Durant and Rich Kleiman’s 35V, Blockwall, Kraken Ventures, and Spice Capital.

Immortal Game was founded in March 2021 led by serial entrepreneurs Thomas Zaepffel, David Cingala and Geoffroy Mestrallet each with track records of building successful ventures.  The company had previously raised USD 3.5 million in seed funding earlier in the year with a round co-led by Cassius and Greenfield One that was also backed by GFC, Kraken Ventures, Moonfire, Kima Ventures, Blockwall and BlackPool DAO.

Immortal Game will use the funding to accelerate the momentum of its product as well as expand into key markets including India, US and Europe. In fact, India is by far the most crucial market as it gets around 1/4th of the total traffic globally. Hiring is on full spree in India and the Grand Masters from India who are supporting Immortal Game include Arjun Erigaisi, Vidit Santosh Gujrathi, Harikrishna, Srinath Narayanan, Harika Dronavilli, Adhiban Baskaran, Rameshbabu Praggnanandhaa, Nihal Sarin and Surya Shekhar Ganguly.

Commenting on his association with Immortal Game, Grandmaster Vidit Santosh Gujrathi said, “I’ve always wanted to contribute towards the growth of the Chess community. It is great to see that Chess is now not only a recreational sport but people are planning to pursue it as a career. I feel privileged to be associated with Immortal Game. They’ve come up with a unique project with the idea of involving top Chess players and giving them a real feel of an online event. I am eagerly looking forward to this association and look forward to work closely with the IGE team, ambassadors and especially the community.”

“Being an ambassador for Immortal Game allows me to serve as an inspiration to a great community of young players, which I like to see as the future of chess”, said Praggnanandhaa Rameshbabu, Chess Grandmaster and youngest International Master in history. “Their focus on young players from all over the world is meant to uplift a new generation of upcoming Grandmasters, the ones who grew up playing chess online, who feel as much at ease behind a keyboard as behind a real-life chessboard. I am proud to represent this generation in such an ambitious and innovative project.”

With 800 million players worldwide, chess has never been more popular. New technology platforms have introduced the game to an entirely new generation and secured its place in pop culture from Netflix’s “Queen’s Gambit” to the growth of chess influencers on streaming platforms.  Scott Frank, the Queen’s Gambit producer, is an adviser to Immortal Game.

Powered by blockchain, Immortal Game is being created in collaboration with, and for, the dedicated chess community. It aims to elevate the gaming experience for online chess players around the world, who currently play over 20 million games daily, by leveraging web3 and next generation digital assets.

Thomas Zaepffel, CEO at Immortal Game commented: “An inflection point in the adoption of blockchain technology for consumer gaming has been reached. Chess is a centuries old game that benefits from this technology, preserving its heritage while attracting a new group of players. We are excited for the support of 50 Grand Masters as we continue to broaden the reach of this incredible game.”

Players can participate in live games, league tournaments and a robust set of learning tools and products. The 50 Grand Masters who serve as Immortal Game ambassadors will also be involved and regularly accessible on the platform. These GMs include World Blitz Champion Maxime Vachier-Lagrave and India’s youngest GM in history Pragganandhaa Rameshbabu. Players also have the option to monetize their time, participation in the game and skill development through a state-of-the-art Play&Earn* platform, NFTs with chess utilities and distinct playing styles, and a marketplace with live auctions and instant buy.

In addition to the founding team, it already has a strong team of experts in chess, tech and web3. Sebastien Borget, Co-Founder and COO at the Sandbox, Brian O’Hagan, Head of Growth at Sorare and Julien Bouteloup, a renowned tech entrepreneur and investor all advise the company.

Immortal Game has partnered with Immutable X, a layer 2 gaming protocol, to bring their game onto the world’s leading public blockchain, Ethereum.**   “Immortal Game is at the cutting-edge of games and blockchain technology,” said Jesse Jacobs, Co-Founder and Partner, TCG. “The team is world-class, the product is excellent and the vision is inspiring.  We’re excited to partner with Thomas, David and Geoffroy as they expand the gaming experience for passionate communities in new and exciting ways.”