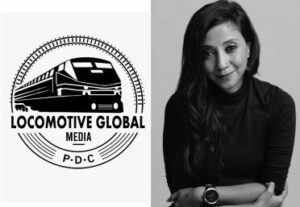 In  a continued effort to amplify its original productions , Locomotive Global Media, an international production company based in Mumbai, has moved to further bolster its leadership team with the appointment of Roshni Ghosh as Producer for the company’s original films and series. Roshni’s appointment is with immediate effect.

In her new role, Roshni will work closely with Sunder Aaron and Kanupriya Iyer to identify interesting new projects and collaborators for shows and films for the company as well as work in a producorial capacity on the existing projects. A motivated and highly disruptive content creator, Roshni will play a key role in managing all stages of the development and production of LGM projects. Her addition  adds greater depth and experience to the company’s executive ranks.

Roshni joins Locomotive Global Media from Emmay Entertainment and Motion Pictures where she headed the content vertical and worked on all aspects of greenlighting projects across films and series content. During her tenure there, she facilitated the development and execution of successful series’ such as The Empire, Rocket Boys S1 and S2, and Mumbai Diaries S1 and S2. With experience of almost two decades in the Indian media and entertainment industry, Roshni’s biggest thrill has always been  to break the status quo with new formats, sourcing interesting and contextual stories, and finding new and entertaining ways of storytelling. Her strong suit to oversee content creation with a 360-degree lens makes Roshni a valuable addition to Locomotive Global Media’s team.

Speaking on the new appointment, Sunder Aaron, Co-founder, and principal of Locomotive Global Inc., said, “We are delighted to welcome Roshni to LGM. It’s not enough to identify and develop exceptional ideas for original  films and series, and it is equally important that you be able to promote, sell and produce the projects based on these ideas. We know Roshni to be a professional who operates effectively and efficiently across the whole value chain of our production business. Quite simply she is an outstanding creative executive who gets things done!   Her appointment comes at a crucial point as we move towards an important phase of growth in the business.”

Commenting on her appointment, Roshni Ghosh, Senior Producer, Locomotive Global Media, said, “It gives me immense gratitude to be a part of the team at Locomotive Global Media. I am looking forward to working alongside Sunder and Kanupriya and the rest of the team to create projects that are in line with the company’s brand ethos, and more importantly, have an impact on audiences in India and around the world..”