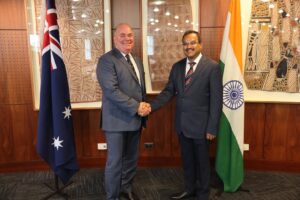 Both parties reaffirmed their commitment to work together and coordinate on this crucial aspect of the India-Australia Comprehensive Strategic Partnership.

India and Australia both condemned terrorism in all of its forms and manifestations, emphasising the importance of bolstering international collaboration in order to confront terrorism in a comprehensive and long-term manner. Both sides criticised the cross-border use of terrorist proxies.

India and Australia emphasised the critical need for all governments to take prompt, continuous, verifiable, and irreversible steps to guarantee that no territory under their control is utilised for terrorist activities and to bring the perpetrators of such attacks to justice as quickly as possible. Australia condemned terrorist assaults in India, including the 26/11 Mumbai, Pathankot, and Pulwama attacks, and reaffirmed its support for the Indian people and government in the global fight against terrorism.

Both sides reaffirmed their commitment to work closely together to address these problems, and they discussed methods to increase engagement between their respective counterpart agencies to advance counter-terrorism interaction, collaboration, and information sharing.

The two sides also addressed measures to improve counter-terrorism cooperation in international fora such as the UN, G20, GCTF, ARF, IORA, and FATF, as well as other Quad partners. Australia expressed interest in hosting India at the next Quad Counter-Terrorism Tabletop Exercise in October 2022, while India welcomed Australia’s involvement in the proposed No Money for Terror Conference in New Delhi later that year.

This story is reported by – Raj Suri (Sydney)