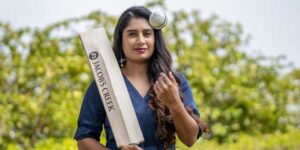 Considered as one of the finest female cricketers of all time, Mithali Raj is a name synonymous with shattering the glass ceiling in a male-dominated sport. She is the highest run-scorer in women’s international cricket and is the only woman to score 7000 ODI runs in cricket. She became the first Indian cricketer to complete 2000 runs in T20Is in June 2018 during the Women’s Asia Cup. A proud recipient of the Arjuna Award, Mithali was also conferred the very prestigious Padma Shri in 2015 for her cricketing achievements. With Jacob Creek’s association with cricket, Mithali Raj, a cricketing legend, became an obvious choice to represent the brand in India.

Regarding her association with Jacob’s Creek, Mithali Raj, Captain of the Indian Women’s cricket team, said, “Jacob’s Creek and Cricket share a unique ability to connect people and I am delighted to be associated with Jacob’s Creek, a brand that has consistently supported sports through various partnerships. Jacob’s Creek is the official wine partner for the upcoming ICC Women’s World Cup 2022 and has a long-standing relationship with the game of cricket. Building on this long-established connection with the sport, I am really excited to see this partnership flourish, especially at such an opportune time, just ahead of the women’s World Cup.”

Kartik Mohindra, Chief Marketing Officer, Pernod Ricard India said, “We are proud to associate with an all-time cricketing legend, Mithali Raj, for the upcoming ICC Women’s World Cup 2022 in New Zealand. We are extremely excited to have her on board as she has been a source of inspiration to all budding cricketers on and off the field. Mithali has been the guiding light for women’s cricket in India for over two decades and we believe that her authentic spirit perfectly represents the values which Jacob’s Creek represents.”

The International Cricket Council (ICC) has named Jacob’s Creek as its Official Wine Partner until the end of 2023, with its major tournament, the ICC Women’s World Cup 2022, set to take place in New Zealand in March’22.