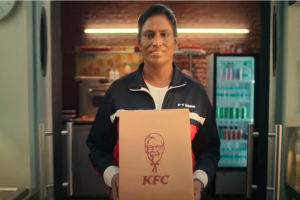 KFC India has roped in athlete PT Usha for its new campaign to endorse its ‘Express Pick-up’ service. In the campaign, the company promotes its recently launched service that promises delivery within seven minutes. “The legend PT Usha epitomises all things speed and who better to convey our new Express Pick-up service than her. In the film, PT Usha doubles up as a high-speed chef in the KFC kitchen, with the Colonel by her side, cheering her on. Our seven-minute promise is a key differentiator, ensuring minimal waiting time for the order,” Moksh Chopra, chief marketing officer, KFC India, said.

In the opening part of the campaign film, two customers are seen walking into a KFC store. They find it hard to believe when they discover that KFC India has launched a seven-minute express pick up. They joke about how the order must be prepared by PT Usha as who else would be so fast. But to their surprise, Usha herself serves them the order.

“Since we’ve been kids, speed has had only one name: PT Usha. The fact is, even now, PT Usha is the icon for speed in India. So, for KFC’s super-fast take away service, there could be no better endorser to say ‘seven minute matlab seven minute’. The film pretty much wrote itself from there. And we were thrilled to have the legend onboard,” Ritu Sharda, chief creative officer, Ogilvy North,said.

KFC India is already known for its signature taste and is now breaking all speed limits on pick-up orders with its Express Pickup service, Usha said. “While ‘speed’ is certainly thrilling for me, this even takes it a notch higher with express. The concept itself was so exciting that I jumped at the opportunity of featuring in the campaign, alongside the beloved Colonel. It was a real pleasure being a part of the campaign, serving up some hot and crispy KFC chicken, all within seven minutes,” she added.