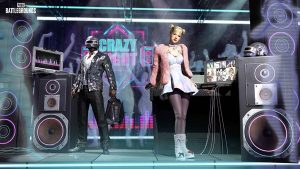 PUBG: BATTLEGROUNDS Update 13.2 has arrived, bringing with it the game’s newest Survivor Pass: CRAZY NIGHT, which will last eight weeks instead of the usual six weeks. The patch also adds the P90 SMG weapon to Care Packages, as well as a new vehicle, gameplay system, weapon, and weather pattern to the Taego area, which is situated in South Korea.

Survivor Pass: CRAZY NIGHT: The game’s developers, PUBG Studios, made additional changes to the game’s Survivor Pass system by extending the service period from six weeks to eight weeks. Through Nov. 2 (PDT), players can earn a variety of rewards – including a Contraband Coupon, Name Plate and Spray – as they progress through 50 levels.

New Weapon – P90 SMG: Starting with Update 13.2, the fan-requested P90 SMG will be available via Care Packages on all maps. The P90 is the first Care Package SMG since the original Tommy Gun and comes loaded with its own unique 5.7mm high-powered ammo that makes it effective during long-range encounters.

Updates to the Taego Map: The popular South Korea-set 8×8 map has received a series of adjustments including but not limited to:

New Vehicle – Porter: This Hyundai pick-up truck is exclusive to Taego and can accommodate up to four passengers. The Porter replaces the UAZ vehicle on Taego.

New Feature – Trunk System: With this system, players can use the trunk on the Porter vehicle to store a limited number of items to take with them throughout the map. But be careful, all items will be lost if the vehicle is destroyed.

New Weapon – Blue Zone Grenade: This throwable item creates a round Blue Zone with a maximum radius of 10 meters and deals 10 damage per second. Strategic players will find this to be a useful tool to lure enemies out of buildings.

New Weather Options: Starting with 13.2, “Sunset” and “Overcast” weather patterns are randomly applied to Taego, giving the map a unique look and feel.

Introducing Casual Mode: For players new to the game or for those who want to warm up in a less tense environment, 13.2 will add Casual Mode to the game. Players can play up to three Casual Mode matches per day solo or with a team and earn XP rewards, BP rewards, complete Pass Missions, complete Event Missions and more. Casual mode is only available on Erangel.