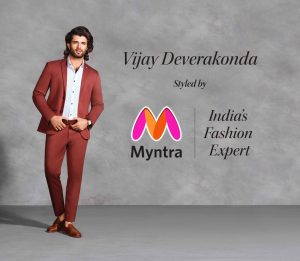 Myntra announces the launch of its latest brand campaign with its new brand ambassador, Vijay Deverakonda, aimed at establishing the brand as India’s Fashion Expert. This is part of a larger, nationwide star-studded brand campaign, with some of the most popular actors from cinema, entertainment and fashion, who are also much-loved fashion-icons, making it one of the biggest celebrity-led campaigns for an e-commerce brand in India.

Vijay’s extreme popularity, given his success and ability to be effortlessly stylish, coupled with his charismatic attitude, has earned him quite a following. This association will certainly make customers look out for their favorite actor’s wardrobe on Myntra, even more now. Vijay’s fan following across  cohorts  will strengthen Myntra’s position as the premium fashion destination of choice and bring in additional salience for the brand.

Myntra has launched a mega-brand campaign with the combined star power from across film industries, featuring the most sought after celebrities. With these stars who are loved and admired for their acting prowess and fashion quotient, Myntra is set to unleash its biggest-ever line up of brand commercials.

On his association with Myntra and the new brand campaign, cine star Vijay Deverakonda stated, “The youth of today including myself are the type to experiment and break the traditional ‘rules’ of fashion. My partnership with Myntra aligns with this passion of mine and I see myself collaborating with them to democratize fashion for the people out there. I am extremely excited about being an ambassador for the brand. ”

Speaking on the launch of the brand campaign, Harish Narayanan, CMO, Myntra, said, “Vijay Deverakonda is a cinematic force to reckon with, with a deep connect and resonance with his fans owing to his unique style and attitude. A majority of the youth in India are immensely inclined towards cinema and entertainment and Vijay wields a strong influence on people’s fashion choices and aspirations, making him the perfect choice to represent the Myntra brand. We are elated to welcome Vijay to the Myntra bandwagon for this one-of-its-kind celebrity-led marketing campaigns in the country.”

Myntra is implementing a 360-degree approach, leveraging TV, Digital and Social platforms to deliver the campaign ad film in the two states.