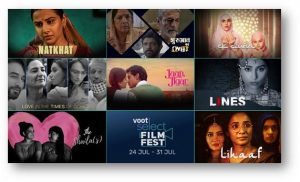 “The cinema has no boundary; it is a ribbon of dream.” – Orson Welles

These words perfectly capture the essence of cinema and what it means to the audience of today- a diverse, unconventional spectrum that redefines perceptions, via an innate and magnificent craft. As an ever-evolving medium, cinema enjoys an unparalleled love for its grandeur in vision and the variance in formats. As a platform that celebrates thought-provoking narratives, with its brand promise ‘made for stories’, Voot Select is set to host one of the biggest and first of its kind direct-to-OTT film festivals, the Voot Select Film Fest. Specially curated with some unique and varied films and anthologies from across the country, the film fest starting 24th July will stream 15 critically acclaimed movies across genres in a span of 8 days.

Voot Select Film Festival boasts of some exemplary work of art that focuses on socially relevant topics coupled with inspiring stories that challenge conventions and showcase #IndiaUnfiltered.  The movies that will be a part of the film festival include Natkhat, Shuruaat Ka Twist (anthology), Ek Duaa, Love in the Times of Corona (anthology), Jaan Jigar, Lines, The Shaila(s) and Lihaaf. While the globally renowned and Oscar entrant Natkhat challenges patriarchy that has been embedded in our society and highlights gender equality, Ek Duaa, throws light on gender discrimination in a family set-up while Shuruaat Ka Twist, is an omnibus of 6 short films mentored by Rajkumar Hirani, Vikramaditya Motwane, Raj Kumar Gupta and Amit V. Masurkar, offering varied interpretations of the theme of ‘Twist’ through short stories. A gripping satirical narrative The Shailas will showcase a tumultuous relationship, wrought by class and caste boundaries, while Jaan Jigar will deal with the issue of moral policing around ‘love’ in a small town of North India. Lihaaf, based on one of the most celebrated masterpieces of author Ismat Chughtai by the same name, will throw light on the same-sex love and freedom of speech for women, in a male-dominated society. The anthology Love, In The Times Of Corona, backed by joyous and magnanimous storytelling, explores the current turbulent time when the whole world is reassessing what’s most important in their lives with a deeper understanding. Lines, set in 1999, chronicles the life of a young girl who is divided by borders with her husband and how she returns to him.

These impeccable stories will bring together a distinguished repertoire of artists such as Vidya Balan, Neena Gupta, Amit Sial, Chunky Pandey, Esha Deol, Hina Khan, Dipannita Sharma, Shibani Dandekar, Adil Hussein, Kaneez Surka, Tannishtha Chatterjee, Anushka Sen amongst others, who are known for their outstanding contribution to cinema and art.

Chunky Pandey seen in Shuruaat Ka Twist said, “Honouring some great work, Voot Select Film Festival is the largest cinematic experience in India depicting true, realistic and socially relevant issues of today’s day and age. Highlighting the theme ‘Twist’, my movie Tap Tap in the Shuruaat Ka Twist anthology showcases the struggle of a singer at the twilight of his career to regain his magic.  I related a lot while playing this character and thoroughly enjoyed playing it and I am certain that the audience will love it too.”

Speaking about Ek Duaa, Esha Deol said, “It’s an absolute honor to see your work getting an ideal platform like Voot Select Film Festival that is set to showcase many inspirational stories across the storytelling spectrum. I’m extremely proud of ‘Ek Duaa’ which is my home production, and it was an enriching experience to portray the character of Abida who is fighting against gender discrimination in the thresholds of her own house. Ek Duaa is my humble contribution towards such a big issue and I have never been so emotionally invested in any character before. It has truly been a product of sheer hard work that will strike a chord with the audience.”

Popular actor Hina Khan commented “Lines is a very film that is punctuated with unfiltered emotions and a powerful story. It is a beautiful depiction of an innocent couple divided by borders and their struggle of finding their way to each other.  I always believe in experimenting and surprising my audience and ‘Lines’ that is a part of Voot Select Film Festival will introduce them to a different side of me. It has been incredible of learning and self-discovering and I hope that my fans like it and appreciate it.