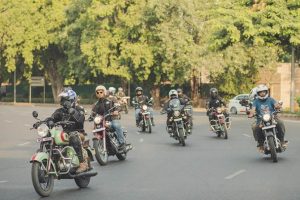 1971 – It is not just a number or a year on the calendar. 1971 signifies a glorious milestone, decorated with the bravery and valour of our armed forces leading to one of the most remarkable victories in the history of India as a nation.

This year marks the 50th anniversary of the 1971 war victory and Jawa Motorcycles has come to the fore to offer a tribute to the gallantry of our Forever Heroes. Jawa Motorcycles holds a special place for the men and women who fought in the armed forces and #ForeverHeroes is the cornerstone of the brand’s existence; this is a gesture to give back and acknowledge the great sacrifices made by those in the Army. This is Jawa’s salute to the brave and the bold.

Jawa has also introduced two new colours – Khakhi and Midnight Grey – of it modern Classic Jawa proudly embedded with the army insignia to salute the spirit of bravery, service and valour of the Indian Army and commemorate the 50th Anniversary of the 1971 war victory. The new initiative, tag-lined ‘The Brave & The Bold’ shows gratitude towards to the brave jawans from our Armed Forces.

Setting the context for this tribute, Anupam Thareja, Co-Founder, Classic Legends said, “How we measure success as a company is not by how many motorcycles we sell. It is by how much we’re able to give back.”

Presenting the two new colours of Jawa as a tribute to the 1971 victory, Ashish Singh Joshi, CEO, Classic Legends said, “We have a special place in our heart for the men and women who protect our nation. We call them Forever Heroes and it’s the cornerstone of Jawa’s existence. It gives us immense pride to dedicate the Jawa Khakhi and Jawa Midnight Grey to commemorate the 50th anniversary of the 1971 war victory. As a company we are honoured to carry the Indian Army’s insignia on our motorcycles that will forever remind the riders of the bravery and sacrifices made by our soldiers to keep our motherland protected.”

To further contribute to the ‘Swarnim Vijay Varsh’ celebrations along the year, Jawa Motorcycles will be a part of various celebratory rides with the Indian Army that mark important landmark occasions like Kargil Vijay Diwas, Battle of Turtuk and Battle of Longewala, with the Jawa Khakhi and Midnight Grey leading the charge.

What makes these motorcycles special is the commemorative emblem that proudly features the prestigious Indian Army insignia flanked by a ‘laurel wreath’ symbolizing the 1971 victory. Jawa Motorcycles is honoured to be the first manufacturer to be allowed to do so on a production motorcycle.

Born in tribute and steeped in bravery, the two new colours honour the spirit of bravery, service and sacrifice of the Indian Army, and embody the spirit of the brave and the bold. The Jawa Khakhi signifies the spirit of selfless service to the nation by the men in uniform. The Jawa Midnight Grey, on the other hand, is inspired by the Battle of Longewala, fought in the western frontier along Rajasthan border. This battle played an important role in India’s victory in the ’71 war where brave soldiers from Indian Army and BSF thwarted the enemy attack and defended our motherland, fighting bravely through the night. Jawa Midnight Grey is an ode to the bravery of these soldiers and the victory that we achieved on this night.