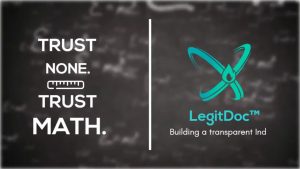 LegitDoc (owned by Crossforge Solutions Pvt. Ltd.), a unique SaaS-based platform that leverages a combination of Ethereum blockchain and cryptographic techniques, has facilitated issuing and verifying of around 1 million digital diploma certificates for students of MSBSD across 8 academic years. These certificates can be instantly verified from anywhere around the world.

The Maharashtra State Board of Skill Development (MSBSD) has taken a bold step towards tackling the longstanding problem of forgery of documents and LegitDoc to help implement it.

Blockchain, which is touted to be the major next step in the Internet’s evolution, has already disrupted the financial sector by building a parallel, decentralised financial system. Sensing its potential, Governments across the globe have experimented with various blockchain-powered applications to revolutionize their E-governance programs. However, when it comes to blockchain-based educational document registry, only three such full-scale implementations have taken place namely the Government of Malta, the Government of Singapore and the Government of Bahrain. Now, the Government of Maharashtra becomes only the 4th government entity in the world to achieve this remarkable feat at a never-seen-before scale.

Even though digitisation is gaining popularity, doing so using the traditional centralised digital solutions has its own challenges. Some of the challenges include threats to data security, privacy and ownership, and the high cost of setting up and maintaining a dedicated centralised infrastructure. With this massive undertaking for the Government of Maharashtra, LegitDoc is taking on the world of ‘professional document falsification’ through the most secure record registry technology that exists today. Blockchain-based digital document registry is the most robust and scalable way to stop the menace of forgeries, even for countries that lack the necessary resources to adapt traditional digital solutions to combat the problem.

With the help of Legitdoc, Each student will receive a “certficate_LegitDoc.zip” digital file containing the original PDF diploma certificate issued by MSBSD and its corresponding blockchain proof file generated by the LegitDoc software. Students can share their respective “certficate_LegitDoc.zip” files with anyone who wishes to verify them, such as employers, universities, etc. and prove their legitimacy.

Francis, Neil and Vishnu, the Co-founders of LegitDoc, believe that the LegitDoc document issued using their software stands the test of forgery, data privacy, ease of verification, cost-effectiveness, eco-friendliness and ease of migration for issuers such as MSBSD.

Talking about the impact LegitDoc is making with their recent project for the Government of Maharashtra, Neil says “LegitDoc has reduced the manpower required to dispatch certificates to students from 1122 to just 2. Even for verification, there is now no need for any human intervention. Above all, the time taken to verify documents, which was 20 to 45 days, will now be just 10 seconds with LegitDoc. Moreover, despite it being a digital solution, students alone will have complete ownership of their certificates.”

“In the early days, prospective clients were wary of being the first-time adopters of blockchain technology in India. However, things started to gain momentum when we started participating and winning some government-led competitions such as the Government Mentorship Program (Government of Telangana), Maharashtra Startup Week Challenge, Elevate-2019, The Ten Minute Million (IIT-Bombay) and the ASSOCHAM Startup Launchpad, among others. LegitDoc is also a part of the fourth cohort of T-Hub’s flagship Lab32 program.” – Neil, CEO, LegitDoc.

LegitDoc’s decentralised application is currently being leveraged by two Indian state governments and three corporate clients. The team is now looking to spread their footprint across various document issuers such as banks, insurance companies, hospitals, medical labs and educational institutions. In addition, they expect to onboard more global clients from countries including India, Kenya and Oman.