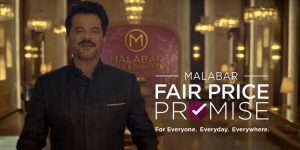 Malabar Gold & Diamonds is one of the world’s leading gold and diamond jewellery retailers with over 260 stores across 10 countries. For close to three decades, Malabar has offered the assurance of unmatched quality and fair pricing.

82.5 Communications, an agency known for its Indian pedigree and award-winning campaigns, was recently tasked with devising a campaign for Malabar’s fair pricing policy.

The campaign conceived by 82.5 Communications, outlines the benefits of standardised pricing. The term ‘Fair Price Promise’ is a clever take on the policy. Famous Bollywood star Anil Kapoor has been used to communicate the fact that the making charges are priced reasonably, be it a celebrity or a common man. The supporting line ‘For Everyone. Every Day. Everywhere.’ underscores the fact that the promise holds true for all circumstances. The campaign consists of a TVC, along with extensions in print, radio and the digital medium.

“Since various jewellers charge exorbitant making charges, consumers feel that they do not get the right deal despite discounts, offers, extensive comparing and bargaining. We, at Malabar, believe that consumers should be saved from this conundrum. That’s why we have put in place our Fair Price Promise. It addresses this concern and assigns transparent and reasonable making charges on jewellery. So that everyone gets the best deal, every day and everywhere,” said M.P. Ahammed, Chairman – Malabar Group.

Naveen Raman, Sr Vice President & South Head, 82.5 Communications added “In the jewellery industry there is a tendency to quote marked up making charges, which is not favourable for consumers. To remedy the situation, Malabar offers a fair pricing policy, which benefits customers as they do not have to bargain to bring down the making charges to an acceptable level”.

The film link is given below:

Speaking of the campaign, Sangeetha Sampath and Ravi Cherussola (Group Creative Directors, 82.5 Communications Bangalore) say, “It feels good to be associated with such an iconic brand. We feel the film is an elegant yet impactful expression of a very unique feature. It was a delight to work on the brand and especially this film.”