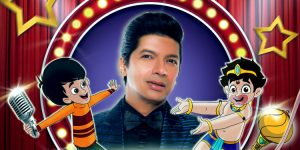 Cosmos-Maya released a brand-new title audio signature for their superhit show Selfie With Bajrangi. The show is awaiting the release of its next season really soon, and the makers celebrated the success and creative transition of the series with all-new earworms in Hindi, Tamil and Telugu penned and composed by music industry veterans Sameer Anjaan and Raju Singh respectively, with popular Bollywood singer Shaan humming the Hindi version of the tune.

Selfie With Bajrangi has been entertaining millions of kids in India and is currently in the top-performing kids shows on leading channels on Indian TV and is a kids’ favourite on digital platforms as well. The show has already released over a massive 300 episodes within 4 years, which only reflects how the makers are passionate about this kind of content, and how the show has performed so well that channel partners and platforms have taken on more and more episodes, as it continues to rule the rating game and the hearts of kids.

Ketan Mehta, founder of Cosmos-Maya says, “SWB has very organically grown as a brand to become a kids’ favourite among homegrown Indian animated shows, owing to its light, friendly elements and fun environment. Every young kid has sought to have a divine friend like Bajrangi, who understands him and sticks around with him through thick and thin, helping him out through the most impossible situations. SWB taps into the creative gene pool and the innate cultural intricacies of Indian storytelling, which is one of the reasons this show has worked very well with today’s kids and families alike because even our audience’s parents approve of such contemporary role models, and their quirky style of emotive, educative and entertaining storytelling. The new title song by Shaan, Sameer, and Raju reflects everything great about this beautiful relationship between Ankush, Bajrangi and our viewers.”

Selfie With Bajrangi came into being from the idea that a mythological character could be transmuted into a contemporary setting in a slice-of-life fantasy genre. This genre was amplified by the coming of SWB and eventually created space for shows like Gadget Guru Ganesha, a similar show about the relationship between a set of orphans and the eponymous mystical being.

The show chronicles the adventures of a nine-year-old boy Ankush and his special friendship with the mystical kid Bajrangi who looks like and possesses powers like Lord Hanuman and is invisible to everyone except the protagonist. Bajrangi understands Ankush deeply and knows everything going on in his young friend’s life. Although Bajrangi mostly hangs out with and helps his buddy Ankush in his adventures, he has a friendly attitude toward any good child around who wishes to have a close friend such as him.

Anish Mehta, CEO of Cosmos-Maya says, “SWB is geared to grow as a full-bodied 360-degree IP with its reach across online and offline business avenues, to eventually become a valuable asset for partner brands to connect with. We already have ongoing collaboration discussions with multiple brands in the ed-tech, e-commerce and the licensing and merchandising space, especially toys and kids apparel. The show has the makings of a flagship cartoon series and our studio and channel partners are working closely to get it there.”

Dheeraj Berry, Chief Creative Officer at Cosmos-Maya and creative director of the show say, “Ankush aur Bajrangi dono hain number 1 – this hook of the song works wonderfully to capture the essence of our two characters’ relationship, as well as the love kids, have for them. The song heralds the arrival of the next season of Selfie With Bajrangi with the festive fervour and fanfare that the show deserves, and also celebrates the audience who watches this show and makes it one of the top shows on Indian kids TV. The upcoming season will have more diverse narratives than ever before with multiple creative theme buckets taking our characters across multiple geographies within India, exploring newer avatars across new episode genres and crossovers with other uber-popular characters from parallel kids’ favourite shows from Cosmos-Maya.”

Commenting on his collaboration with Selfie With Bajrangi and the ability to reach so many young minds, Shaan says, “I have a soft spot for animated series, especially kids’ cartoons and that’s what brings me on board for another one with Cosmos-Maya for the latest season of SWB. The added incentive, of course, was to work with the legendary Sameer Ji and the super talented Raju Singh. I had a great time recording this new title track for this amazing hit show, it’s catchy and fun and I am confident that the kids will fall in love with the energetic new tune.”