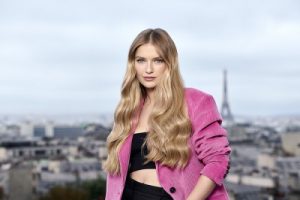 She’s the rising French actress who beamed into homes as the best friend we’d all want if we moved to Paris. L’Oréal Paris is thrilled to announce the world’s favorite new Parisienne, actress Camille Razat as global ambassador. With the message: “you’re worth it just the way you are.”

“Don’t compare yourself to others, you’re enough. Love yourself so others can love you and if they don’t, that’s not your problem.” Camille Razat

Who is Camille Razat? The question on everyone’s lips during the first season of Emily in Paris, the Netflix series from Sex and the City creator Darren Star. Befriending Emily, played by Lily Collins, as she navigates the culture shock of new life in the city of light, Camille keeps her own name to play the quintessential French cool girl with all the invites and the effortless chic. The incarnation of the Parisienne she plays, while the series introduced Camille to a global audience, the 27-year-old has been lighting up French screens since she was 21.

FORGING HER OWN PATH

At 18, she shelved plans to train as a journalist, following her instinct to enrol in Paris’ prestigious Cours Florent acting school. Still in her second year there, she landed a role in French tv drama, Disparue (The Disappearance) which went on to global distribution. Small parts followed, alongside Gerard Depardieu in Capitaine Marleau, then in Clint Eastwood’s 15:17 to Paris. Further roles include in the comedies Ami Ami by Victor Saint Macary and Rock’n roll directed by Guillaume Canet. In 2019, she was nominated for a César award, for her role in L’Amour est une fête (Love is a party). And that same year she made her solo theatrical debut in Le Vieux Juif blonde, a role for which she was preselected for France’s leading theatre awards, the Molières

“L’Oréal Paris is a brand that sincerely cares about women. They actually give power to all types of women whatever their origin, whatever their age. They challenge stereotypes to share a modern vision of femininity. I think of it as a synergy between multiple women to help each other and believe in each other. So, I’m really happy and humbled to be a part of this beautiful sisterhood and mission.” –  Camille Razat

“Encouraging women to chase their dreams is our mission at L’Oréal Paris, and Camille Razat is a rising actress doing just that. Beyond her namesake character as the new Parisienne, her bold stage performances and independent French cinema choices show the freedom of daring your own potential. We’re delighted to welcome Camille to our L’Oréal Paris family, inspiring women on their journey to fulfilment.” – Delphine Viguier-Hovasse, Global Brand President, L’Oréal Paris.

Determined to avoid typecasting, while currently filming season 2 of Emily in Paris, Camille Razat is going places with tougher material. In 2021, she stars alongside Charlotte Gainsbourg in Les choses humaines directed by Yvan Attal, which examines consent and sexual assault. She also takes on the devastating demons awakened in a young psychiatrist for her lead role in thriller Mastemah from new director Didier D Daarwin. And she’s currently producing her own screenplay.

“If you want it, go get it. Do NOT accept NO for an answer. Most influential and successful people did not take no for an answer. They started from the bottom now they’re here.” Camille Razat.

Living to the mantra “Keep walking” that she has tattooed on her forearm in memory of a loved one, Camille Razat has overcome the self-doubt that besieged her when she began modelling in her teens, when she says: “I felt like I wasn’t worth it.” Today a vision of self-confidence, a keen boxer and gamer, she’s an inspiration for young women to step outside their comfort zone and to keep going to achieve their goals.