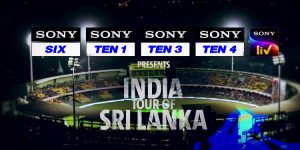 The Men in Blue are all set to return on Sony Pictures Sports Network (SPSN) as the India tour of Sri Lanka begins on July 13, 2021. The series which will feature 3 ODIs and 3 T20Is will be aired in India LIVE in four languages: SONY TEN 1 and SONY SIX in English, SONY TEN 3 in Hindi, and on the newly launched SONY TEN 4 in Tamil and Telugu from 1.30 pm IST as well as live-streamed on its on-demand OTT platform SonyLIV.

To enhance fan engagement and ensure an unparalleled viewing experience for audiences across the nation, SPSN will be back with its flagship studio show Extraaa Innings in English and Hindi. The LIVE studio show in English will be presented by former players like Sanjay Manjrekar, Ajit Agarkar, and Ajay Jadeja along with Matt Floyd while the Hindi studio show will be presented by former cricketers namely Mohammad Kaif, Vivek Razdan, Amit Mishra, Saba Karim along with Arjun Pandit. The Tamil commentary box will feature Laxman Sivaramakrishnan, WV Raman, Vidhyut Sivaramakrishnan, T Arasu, and S Seshadri while the Telugu commentary will be presented by Venkatapathy Raju, Gnaneshwar Rao, C Venkatesh, RJ Hemanth, Sandeep Kumar, and Vijay Mahavadi.

The upcoming India tour of Sri Lanka has received a great response from advertisers across multiple sectors and SPSN has roped in brands like Byju’s, Pan Bahar, Amazon Prime, 99 acres.com, Cars 24, Oppo, Tata Motors, Raj Niwas, Vimal, Kent, Unacademy, Housing.com, Policy Bazaar, Paisa Bazaar and Dafa News for the series and are also in the process of closing more brands before the start of the first ODI on 13th July 2021.

Led by former India captain Rahul Dravid who will step in as coach, this will be the first time two senior Indian men’s teams play bilateral series simultaneously. Shikhar Dhawan will captain the young side while Bhuvneshwar Kumar will be the vice-captain in the 3-match ODI and T20I series against Sri Lanka. Devdutt Padikkal, Ruturaj Gaikwad, Nitish Rana, Krishnappa Gowtham, and Chetan Sakariya are likely to receive their maiden Indian cap in ODIs and T20Is and will have the experience of seasoned players like Hardik Pandya, Krunal Pandya, Suryakumar Yadav and more by their side as all eyes will be on the performance and future of the Indian Cricket Team.

To connect with the sentiments and engage with the Indian cricket fans, SPSN launched the #JeetneKiZid campaign that depicts the #HungerToWin or #JeetneKiZid of the Indian Brigade, who are ready to give their all to emerge victorious in Sri Lanka. The campaign calls all Indian cricket fans to show their support and cheer for their home team as the young squad is very determined to emerge victorious in Sri Lanka.

Links for the India Tour of Sri Lanka films: