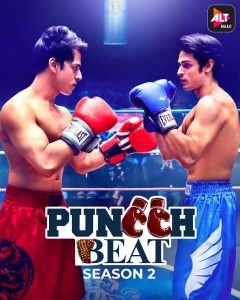 ALTBalaji’s high-school youth drama Puncch Beat released in 2019 and picked up amongst the youth. It was solely because of the show’s relatability factor, its unique storyline, and the masala content that it. The first season received immense love from the viewers who enjoyed the package of action, drama and romance all at once. And two years later, the show is back with Season 2. With the main focus on who will win the final battle between Priyank Sharma and Siddharth Sharma, the second season of the series picks up from where it left off. The series which is targeting millennials and their angst is ticking all the right boxes whether be it romance, drama, glamorous parties and power packed performances. Puncch Beat season 2 is bigger and better than the earlier season, be it in the form of production value, story telling, murder mystery or the action sequences. The audience seems to be appreciating the show and finding it entertaining.

The show brings back popular characters from its debut season. The brooding rivalry between Rahat and Ranbir played by Priyank Sharma and Siddharth Sharma, will witness its peak and probably a conclusion. Then there are changing dynamics between the other batchmates in Rosewood High after last year’s events that take centre stage in the second season.

Puncch Beat 2 has all the elements to become what is a sure-shot blockbuster. It has music, mystery and a lot of masalas. Directed by Akshay Choubey, Puncch Beat 2 takes us to the scenic locales of Dehradun, it takes us to the valleys and the high mountains. The cinematography by Shanu Singh Rajput, and his highly efficient team of DOP, is commendable. They keep you tuned to the characters and the screenplay all the time. One can’t undermine Rahu Kurup and Prem Kumar’s production design. The richness of a high-class family, the exoticness of the venue, and at the same time, the passive experience that they create during the training sessions and in the boxing ring, need an ovation.

Right from the first minute, Puncch Beat 2 doesn’t delve into tergiversating. Without eschewing, the show dives deep into the murder mystery. Yes, if you haven’t figured it yet, the season deals with a murder mystery. The writing of the show is crisp and won’t let your attention pit-a-pat. For the unversed, this season not only deals with Murder but also Mixed Martial Arts (MMA). Shahbaz Khan as the action director has worked neatly on all the action sequences. Especially the fighting sequences between Rahat and Ranbir are… for the lack of a better word… top class. The other congenital M in the show is the music. And if you’ve heard the Puncch Beat Anthem, you know what we are talking about. Whether it is the sequence where Urfi Javed does the dare with Priyank Sharma or the fresher’s party or even the integral sequences, the background music doesn’t let you down. It keeps you glued to the screens and the scenes. Shreerang Ladh’s choreography is also on fleek.

The cast members, Priyank Sharma, Siddharth Sharma, Samyuktha Hegde, Harshita Gaur, and Khushi Joshi, do a fine job. Whether it is the new version of Rahat or Ranbir’s angst, both the Sharma lads from Delhi do an outstanding job. The scene between Rahat and Ranbir, wherein the former tells the latter, ‘Tujhe abhi bhi aisa hi lagta hai mujhe kisi table chair ki zarurat hai tujhe knock out karne ke liye,’ is just a gem. Nikki Walia and Samir Soni bring in their seasoned flavors and in this season you’ll know why these two have survived in the industry for so long. The other cast members Kajol Tyagi, Nikhil Bhambri, Sindhuja Turlapati, Anuj Choudhary, Rushad Rana, Kasturi Banerjee, and Mrinmai Kolwalkar in recurring roles do a good job.

Puncch Beat 2 is already one of the highly anticipated shows. It is touted as one of the most exciting series by several portals and sites. And season 2 definitely stands up to the expectations. Also, let us not forget that this college drama twisted our brains with the big twist that comes in the season. This you definitely can’t miss.

Head to the ALTBalaji app and get started with your binge-marathon. Watch all the 13 episodes of Puncch Beat 2 right away.