Divo partners with Indo Overseas Films for the national OTT release of ‘Mojin: The Treasure Valley 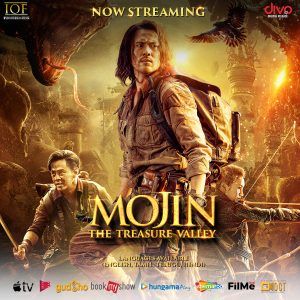 Divo, one of India’s leading and well-established digital media and music companies has partnered with Indo Overseas Films (IOF) for the digital release of the international, highest-grossing movie, “Mojin: The Treasure Valley” in India. The movie is the second in the Mojin series (the first being Mojin: The Lost Legend – 2015) to be released and originally was called Mojin: The Worm Valley (now being released by Divo & IOF under the name Mojin – The Treasure Valley for OTT platforms).

The movie revolves around a legendary tomb explorer named Hu Bayi who is on a hunt to find the cure to an ancient curse in the Tomb of Emperor Xian featuring Hang Cai, Xuan Gu, and Heng Yu in leading roles.

This highly acclaimed movie is now available to viewers in 4 languages (English, Hindi. Tamil, and Telugu) for a pay-per-view model across all leading OTT platforms such as Book My Show, Gudsho, Google Play, Shemaroo, Hungama Play, Filme, Oct Square, and Apple TV.

The movie is being released by Indo Overseas Films (IOF) in India and to ensure a smooth digital release, they have partnered with Divo and handed them the complete digital distribution of the movie on various leading OTT platforms.

Speaking on the release, Firoz Elias, CEO, Indo Overseas Films (IOF) said, “With the evolution of film distribution in India and movies only releasing online, it was imperative for us to partner with a digital distributor, who could provide a smooth process. This movie never got an opportunity to release in India due to the pandemic and considering the current situation, we decided to go ahead with an OTT release. We are glad to team up with Divo for this release, who helped us reach out to a large audience base via correct channels.”

Mojin: The Worm Valley was Released in China in Theaters in 2018, and in the USA in 2019.Speaking on the association, Shahir Muneer, Founder, and Director, Divo said, “With audiences not able to go out and enjoy movies like earlier, it has become important for us to offer them new and fresh content across multiple touch-points. There is a very high demand for content in international languages and it’s our constant endeavor at Divo to provide maximum reach via regional languages.”