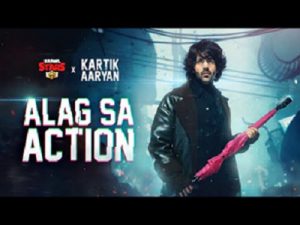 Supercell launched campaign #AlagSaAction with Bollywood hearthrob Kartik Aaryan as the brand ambassador for its blockbuster mobile title ‘Brawl Stars’ on June 20th. Brawl Stars is a fast-paced multiplayer team action game available on the App Store and Google Play. The actor also stars in the game’s new promotion campaign which is centered in the Brawl Universe!

“I’ve been into gaming since my college days, and during the last lockdown, I discovered Brawl Stars. What instantly drew me to this unique game was its pace and intensity, and the fact that I could play it with friends. That makes it more fun for me, as I absolutely love it when some friendly competition is involved,” says Kartik Aaryan.

Talking about his recent association with Supercell, Aaryan adds, “It was great fun working with a brand that goes all out in the creative department. From the script to the game, everything about the whole process was quite in-sync with my vibe. I also loved exploring the action hero genre for a change, and I hope the audience enjoys watching a different avatar of mine!”

The #AlagSaAction campaign, starring Kartik Aaryan illustrates the game’s unique take on multiplayer action. Its launch also coincides with the ‘Brawl Stars’ latest Brawl Pass, bringing unique quests, exclusive rewards, and more. The game’s popularity has been soaring in India with 20 M+ views and over 3.5 M+ engagement for the new campaign across social media platforms recorded in just the last 4 days.

Abhishek Gupta, Founder, Sterling AG said, “Digital marketing is a fairly cluttered space. With this campaign, we wanted to capitalize on the game’s quirky take on action and personalize our outreach. Storytelling is crucial when marketing to Gen Z, especially through quality video content. An action-packed storyline, a glint of humor and the innovative use of music and lyrics, this campaign strikes all the right chords. Gaming in India has become one of the most exciting industries and we wanted to ensure that we tapped into the country’s vast gaming community with this campaign.”

With this campaign, Sterling AG engaged with the vast gaming community in India Fans loved the ‘cinematic feel’ of the campaign and Kartik’s seamless integration into the gameplay. Leading gaming influencers such as Nery (3.14L Subscribers) and Clashing Adda (7.19L Subscribers) created organic reaction videos (a video format popular on streaming platform, YouTube) garnering a further 222K views for the campaign.