Ohio-Based Cryptocurrency Donates $150,000 to Charities in the First Month 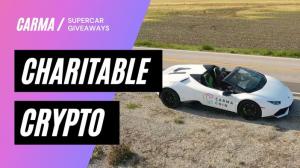 In one month, an Ohio-based cryptocurrency has donated $150,000 to charities and nonprofits across the United States. These donations were funded solely by Carma Coin holders. Holders of the new cryptocurrency participate in a 10% tax on all transactions that include 3% to the “Be Magical Fund” which funds donations to charities as well as supercar giveaways.

Carma Coin developers announced on June 5, 2021, that holders’ buy and sell transactions enabled them to donate $25,000 to Mental Health America and $25,000 to Barstool Fund to support small businesses.

“Mental health is something we struggle with and it’s something I think a lot of our fans struggling with and so that was probably the coolest feeling in the world to be able to do that. You guys did that, so thank you,” said Carma Coin Developer David Butcher

The second round of donations was announced on June 11, 2021. Over Facebook Live the development team shared that another $25,000 was given to both Autism Speaks and No Kid Hungry. On Saturday, June 19th developers announced another set of donations: $10,000 to Dayton Children’s Hospital, $20,000 to Fred Hutchinson Cancer Research Center, and $20,000 to the Ruth Ellis Center.

“Thank you guys for making this happen,” said Brad Butcher, Carma Coin developer. “This is what it’s about. It’s about community. It’s about love. It’s about helping everybody, every step of the way.”