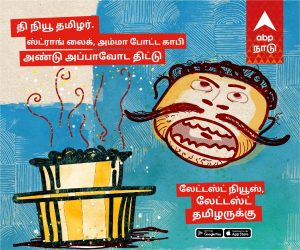 ABP Network’s recently launched Tamil News Digital Platform, ‘ABP Nadu’, has already distinguished itself in the ultra-competitive Tamil Digital news space as it reached a milestone of 3.2 million users in its 2nd month itself. (Source: Google Analytics 15 May – 14 June).

This milestone is especially noteworthy considering the top performer in the market stands at 8.2 million users (Source: Comscore – April 2021).

By the dint of its unique content and unparalleled local news coverage, ABP Nadu has managed to appeal Tamil audiences in only two months since its arrival. The digital news portal saw a whopping 15.4 Million Video Views on Facebook & YouTube, which is only its second month after the launch. These numbers truly reflect the credibility repute of the news portal amongst its users and also shines a light on the platform’s exceptional content delivery.

Since its launch, ABP Nadu has conducted a series of exclusive interviews with eminent personalities, introduced numerous video & text series such as ‘Thupparivalan’ and ‘Social Soldiers’, launched new verticals like Personal Finance and Health, and scaled up its local coverage. The platform has covered noteworthy stories on various key issues such as the mismanagement of dead bodies of COVID-19 patients by the government in Theni, the free temple campaign, and the recently concluded Tamil Nadu assembly elections. Furthermore, ABP Nadu ran a hashtag on its social media platform called ‘#AskAbpNadu’ to resolve people’s queries/doubts related to the lockdown and other important issues. Consistent delivery of quality content and unique engagement initiatives on social media has significantly contributed to the platform’s burgeoning user base.

In the last two months, ABP Nadu has offered a wide range of content choices to its users such as unique pieces on the burning issues of Tamil Nadu, in various content formats such as expert opinion pieces, data stories, and videos. With diverse offerings and a special emphasis on youth-oriented topics, the digital news platform is all set to become a leader in the Tamil Digital news space.

Speaking on the achievement, Mr. Avinash Pandey, CEO, ABP Network said, “Our network has always been known for its credible coverage and viewer-driven content. When we launched ABP Nadu, we coalesced the same approach with the regional flavours of Tamil Nadu. The fact that we are celebrating such a tremendous milestone within our second month itself, is a testament to our dedication towards quality. These numbers will only motivate us to create better, stronger, and more engaging content. We hope our users will continue to repose their faith in us.”