Explained: Why is Gaza almost always mired in conflict?

The Gaza Strip was pounded this week by hundreds of Israeli strikes from sea, land and air, while the enclave’s militant Hamas rulers fired hundreds of rockets into Israel.

It’s the fourth round of major conflict between Israel and Hamas since 2008, with the tiny enclave’s more than 2 million Palestinian residents bearing the brunt of the deaths and the destruction.

The latest eruption of violence has raised the specter of another devastating war and once again drawn international attention to the impoverished, densely populated strip. A timeline of Israel-Palestine conflict

Here’s a look at the Gaza Strip and its place in the Middle East conflict.

Gaza, sandwiched between Israel and Egypt, is just 25 miles (40 kilometers) long and six miles (10 kilometers) wide. It was part of the British-ruled Palestine Mandate before the 1948 war surrounding Israel’s creation, when it came under Egypt’s control.

Large numbers of Palestinians who fled or were driven from what is now Israel ended up in Gaza, and the refugees and their descendants now number 1.4 million, accounting for more than half of Gaza’s population. Palestinian relatives mourn over the bodies of four brothers from the Tanani family that were found under the rubble of a destroyed house following Israeli airstrikes in Beit Lahiya, northern Gaza Strip, May 14. (AP Photo)

Israel captured Gaza, along with the West Bank and east Jerusalem, in the 1967 Mideast war. The Palestinians want all three territories to form their future state.

The first Palestinian intifada, or uprising, erupted in Gaza in 1987 — the same year Hamas was founded — and later spread to the other occupied territories. The Oslo peace process in the 1990s established the Palestinian Authority and gave it limited autonomy in Gaza and parts of the occupied West Bank.

Israel withdrew its troops and Jewish settlements from Gaza in 2005, after a second and far more violent intifada.

The following year, Hamas won a landslide victory in Palestinian elections. That triggered a power struggle with Palestinian President Mahmoud Abbas’ Fatah party, culminating in a week of clashes in 2007 that left Hamas in control of Gaza.

Hamas has done little in the way of imposing Islamic law on Gaza, which was already very conservative. But it has shown no tolerance for dissent, arresting political opponents and violently suppressing rare protests against its rule. 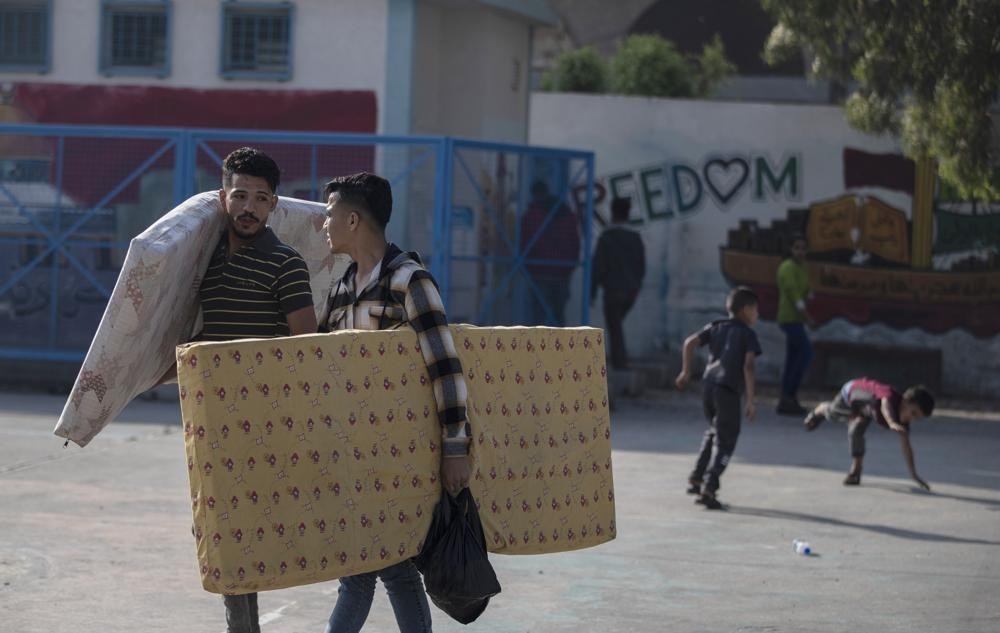 Palestinians take shelter provided by the UN at a school after fleeing their homes from the overnight Israeli heavy missile strikes on their neighborhoods in the outskirts of Gaza City. (AP Photo)

The militant group has remained firmly in power through three wars and a 14-year blockade.

Israel and Egypt imposed the crippling blockade after the Hamas takeover. Israel says it’s needed to keep Hamas and other militant groups from importing arms. Rights groups say the blockade is a form of collective punishment.

The closures, along with years of misrule and Hamas’ long-running feud with the Palestinian Authority, have devastated Gaza’s economy. Unemployment hovers at around 50%, power outages are frequent and the tap water is badly polluted.

Palestinians face heavy movement restrictions that make it difficult to travel abroad for work, study or to visit family, and often refer to Gaza as the world’s largest open-air prison.

Hamas and Israel have fought three wars and several smaller battles. The worst so far was the 2014 war, which lasted for 50 days and killed some 2,200 Palestinians, more than half of them civilians. Seventy-three people were killed on the Israeli side.

Israel’s airstrikes and incursions into Gaza have left vast swaths of destruction, with entire neighborhoods reduced to rubble and thousands forced to shelter in U.N. schools and other facilities. Israel says it makes every effort to avoid civilian casualties and accuses Hamas of using Gazans as human shields.

Palestinian militants have fired thousands of rockets into Israel. The vast majority are intercepted by Israeli missile defenses or land in open areas, but they sow widespread fear and can bring life to a standstill. Their range has steadily increased in recent years, with some striking as far as Tel Aviv and Jerusalem, major metropolitan areas.

Earlier this year, the International Criminal Court launched an investigation into possible war crimes in the Palestinian territories. It is expected to scrutinize the actions of both Israel and Palestinian militants in the 2014 war.

The ICC has also expressed concern about the latest violence.