Violence that began in East Jerusalem in April has expanded to military attacks from both Israel and Palestine. Large scale injuries and fatalities have been reported. Clashes have broken out between Palestinian Arabs and Jewish groups in Israel. The international community looks divided and readying for taking sides in the current Israel-Palestine conflict if it aggravates to another war. Israel and Palestine have a long history of violence. Let’s have a look at the chronology: Before Christ: Israelite King Solomon built a temple in Jerusalem for Jewish people. It remains the holiest site for them. Those were times of empire building and Jerusalem was invaded by Egyptian and later Roman campaigners who attacked that temple. In 70 BC, Romans destroyed a reconstructed temple built at the Jerusalem site. Jewish people fled in large numbers during these centuries.

7th Century: Islamic Caliphate army took control of Jerusalem. Flight of the Jewish people continued for centuries. Europe, particularly in and around Germany, got the biggest population of Jews.

19th Century: Zionist movement was launched with appeal for the return of Jews to Israel or Palestine as it was known.

Post-World War-I: Defeat of Germany in the war (1914-19) saw the rise of Adolf Hitler, who blamed Jews for the country’s defeat. He expanded Germany and Jews were persecuted in areas he controlled. In the post-war settlement, Britain was given the mandate for Palestine and Trans-Jordan (areas including Israel, West Bank and Gaza). Jewish immigration to Israel gained pace.

Post-World War-II (1939-45): With the support from the US and the UK, Jews created the state of Israel in 1948. The declaration came after Jews failed to sign a deal with Arabs for carving out a separate state from Palestine.

1948: First Israel-Arab war began after the Britain’s mandate ended and it lifted its control. Arab countries sided with Palestine, but the war ended with Israel, backed by the US, controlling large area for its nation. Estimated 7 lakh Palestinians lost their homes and became refugees. 1956: Second Israel-Arab war began after Egypt announced nationalisation of the Suez Canal, an important trade route. Israel invaded Egypt, got support from Britain and France. The US and erstwhile USSR brokered a deal to end the war.

1964: Palestinians organised themselves under the Palestinian Liberation Organisation (PLO) for struggle against Israel.

1967: Six-Day War took place in which Israel got defeated Egypt, Jordan and Syria. Israel took control of the Gaza Strip, the West Bank, Sinai Peninsula, the Golan Heights and East Jerusalem, the area from where latest series of violence began. More than 2.50 lakh Palestinians were displaced.

1973: Arab nations formed a coalition to attack Israel. It suffered losses but recovered after receiving supplies from the US. The war led to massive oil crisis.

1978: The US brokered a peace deal between Israel and Egypt. Settling the question of Palestine was part of the deal what came to be known as Camp David Accord. It was never implemented.

1987: First Palestinian Intifada was launched. Intifada means uprising or rebellion. Protests and clashes continued for years in Gaza, the West Bank and inside Israel. Many people died and scores injured during the Intifada.

1993: First major breakthrough was achieved. Israel and the PLO signed what is called the Oslo Peace Accord. It was backed by the United Nations.

1994: A follow-up deal was signed, called the Cairo Agreement between Israel and the PLO. The agreements created the Palestinian Authority which was given the charge of administrative affairs in the West Bank and Gaza. Question of Israeli settlements in the West Bank, and status of Jerusalem remained unresolved. Both Israel and Palestine view Jerusalem as their future capital. A damaged apartment in central Israel on Thursday. (Photo: AP/PTI)

2000: Second Palestinian Intifada was launched. Clashes erupted after Israeli hardliner Aerial Sharon visited the compound that houses both the Temple Mount and Al-Aqsa, the site of current violence.

2006: Hamas won election in Gaza emerging as a political challenger to Fatah party that was moderate and had won in the West Bank.

2008: Palestinian militants fired rockets into Israel, which responded by pummelling missiles into the Palestinian territory. More than 1,100 Palestinians lost their lives, 13 Israeli soldiers were killed.

2012: Another round of rocket fire between Israel and Palestine. Israel killed Hamas military chief in attack.

2014: A seven-week fight ensued after Hamas allegedly kidnapped three Israeli girls from a Jewish settlement in the West Bank and killed them. More than 2,000 Palestinians lost their lives. Israel reported 73 deaths including civilian casualties.

2015: Seeking re-election, Israeli Prime Minister Benjamin Netanyahu declared that there would be no two-state solution to Israel-Palestine question.

2017: The Donald Trump administration of the US recognised Jerusalem as the capital of Israel and announced shifting of its embassy from Tel Aviv to this city. The decision saw fresh protests and clashes in the West Bank and Gaza.

2018: Clashes continued for several months between Palestinian protesters and Israeli security forces. Rocks, bombs and rockets were exchanged. Many died.

2021: Israel barricades Damascus Gate Plaza in the East Jerusalem on April 12. It is a popular gathering place for Palestinians during Ramzan. Protests broke out. On April 16, Israel limits the number of people who can prayer at Al-Aqsa — considered the third holiest mosque in Islam — in East Jerusalem to 10,000 people. Clashes erupt and spreads to Gaza and the West Bank. 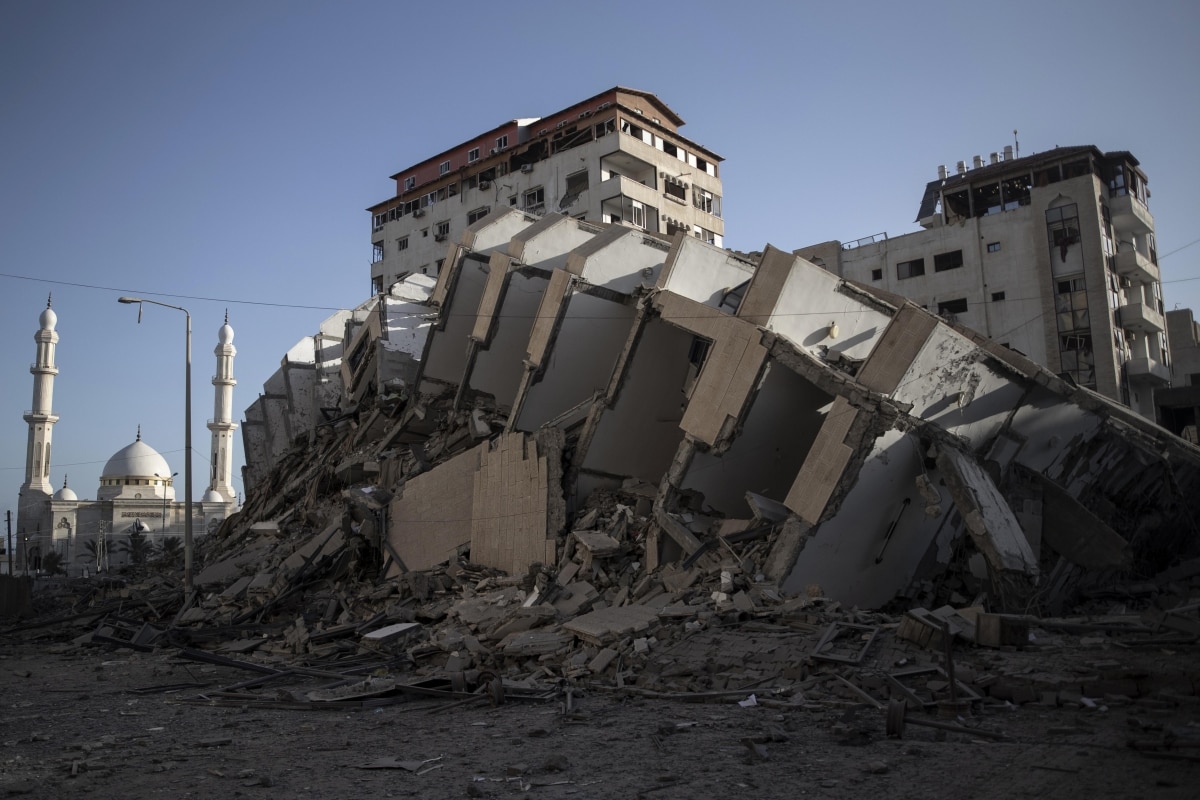 The remains of a building in Gaza City. (Photo: AP/PTI)

ALSO READ: Kerala woman killed in rocket strike in Israel while she was on video call with husband