The Indian economy is often criticised as delivering jobless growth-from 2001 to 2011, the economy’s average growth rate was 7.7 per cent, but the job growth rate was a meagre 1.8 per cent. Reports indicate that matters may not have changed much in the past decade. According to a leaked report from the National Sample Survey Organisation, India’s unemployment rate hit a 45-year high of 6.1 per cent in 2017. However, the Union government has not approved the report, saying that data sets derived with different methodologies are not comparable.

Regardless, the Covid-19 pandemic has unleashed an unprecedented job crisis. The impact has been devastating, more so because 93 per cent of the Indian work force is employed in the unorganised sector. The consequences of the lockdown, the job cuts and the contraction of the economy could even reverse India’s stupendous performance in reducing the share of the population living below the poverty line. 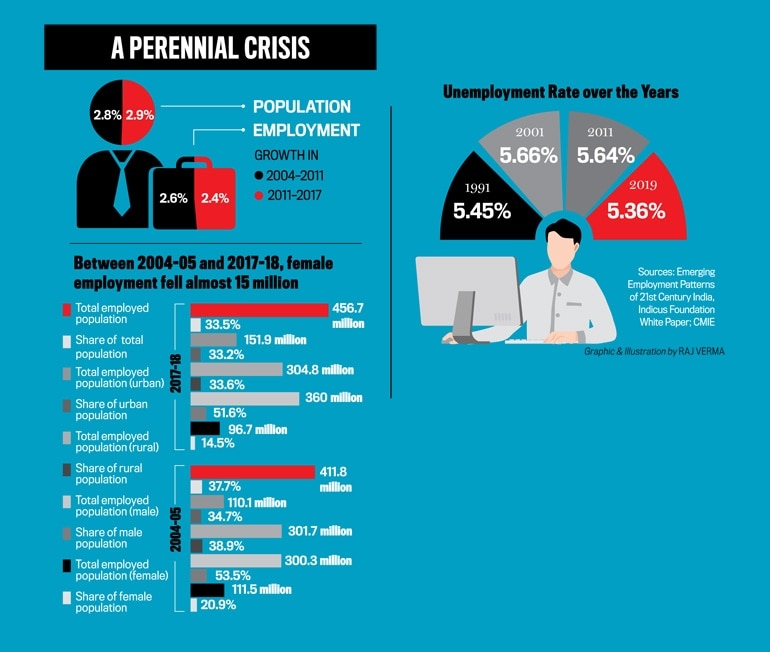 Under these circumstances, the government has a responsibility to provide an economic platform for job generation. Historically, unemployment in India is primarily driven by a declining agricultural labour force and a steady rise in educational qualifications on the demand side, with poor job markets regulated by bad laws and infrastructural bottlenecks on the supply side. While the Narendra Modi government has continued with MNREGA, its skill development mission also aims to prepare workers for the new jobs in today’s labour markets. The Union skill development ministry has claimed that it has provided training to more than 50 million people in the country since 2014-15.

At the same time, Parliament has passed four new labour codes to streamline the Centre’s labour laws. This effort has, however, been met with scepticism. Aside from policy initiatives, the government will have to identify potentially job generating sectors and incentivise existing ones. Easy credit must be made available, particularly to MSMEs. The CII (Confederation of Indian Industry) expects eight sectors-retail, construction, transport and logistics, tourism and hospitality, handlooms and handicrafts, textiles and apparels, food processing and automotives-to generate over 100 million jobs by 2025. Though agriculture remains the biggest employer in India, data published by the Reserve Bank of India shows that nearly a third of the new jobs added in the Indian economy in the post-liberalisation era came from construction. However, while the construction boom helped many seeking an exit from farm jobs, it did not generate very productive jobs. Another booming sector for job generation is the retail industry, accounting for 10 per cent of India’s GDP and nearly 8 per cent of the jobs. The government’s Aatmanirbhar Bharat mission also aims to increase the number of jobs in manufacturing, which accounts for a tenth of total employment. However, what’s worrying is that within manufacturing, the share of labour-intensive industries like textiles and leather has actually shrunk over the past few decades.

As NITI Aayog chairman Amitabh Kant points out, the true challenge is to create well-paying, quality jobs. Government initiatives must meet the aspirations of people who are employed but want higher incomes. Lawmakers and other stakeholders need to work faster towards policies that blend formalisation, urbanisation and industrialisation so that there is a smooth churning of a productive work force. The pandemic could be the much-needed booster to move in that direction.