One major reason is simply spending. Since 2012-13, national annual expenditure on R&D has remained stagnant at 0.7 per cent of GDP. That’s a per capita research spending of $47.2 per person, less than countries like Mexico and Venezuela, though better than Pakistan and Sri Lanka. India has 255 researchers per million people, less than Pakistan’s 336 and exponentially less than Israel’s 8,342 per million.

The islands of global excellence in the Indian R&D sea are the DRDO (Defence Research and Development Organisation) and ISRO (Indian Space Research Organisation). ISRO’s work portfolio now includes 109 spacecraft missions, 77 launch missions, 10 student satellites and two re-entry missions, among others. The agency remains a premier choice for those interested in lobbing satellites into orbit. It has launched 319 foreign satellites so far, and has begun space odysseys way beyond Earth, even to exploring other planets.

Another sector that offers immense potential is biotechnology. India’s leadership in vaccine development, with domestic firms rolling out Covid vaccines in time with global leaders, testifies to this. The ministry of science and technology’s National Biotechnology Development Strategy aims to build on this and establish India as a global bio-manufacturing hub-the country already accounts for 60 per cent of global production, supplying more than 1.5 billion doses of vaccines every year to over 150 countries. The World Health Organization alone sources 70 per cent of its essential immunisation vaccines from India. Another equally promising sector is IT (information technology). Around 75 per cent of the global digital work force is in India-as of 2020, the domestic IT workforce accounted for 4.4 million employees. The IT-BPM industry’s revenue, an estimated $191 billion in FY 20, is expected to reach $350 billion by 2025. This sector has made India a global leader in world-class technology solutions and business services. 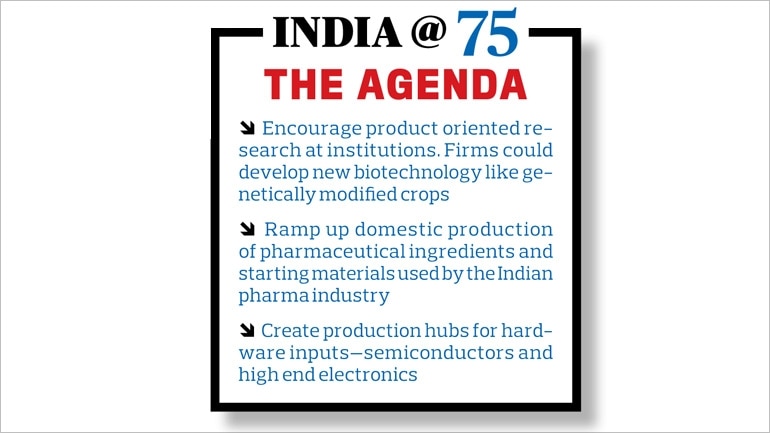 That being said, 70-plus years are a long time. More than enough for a nation to transform itself through science and technology. Both populous countries like China and poorly-resourced ones like Israel have shown that it is possible. In India, the R&D story remains one of patchwork progress. Alongside feats like Mangalyaan and the Covid vaccines stand stories in stark contrast-Indian children succumbing to hypoglycemic encephalopathy in Bihar, the ignominious status of being the world’s largest importer of edible oil. These, in large part, represent our failure to harness the power of science and technology.

India’s quest for self-reliance is still at a very early stage. We are still far from a reality in which all the products in our markets could be made in India. For this, quality and excellence in R&D are