Though Delhi occupies a privileged position in terms of water consumption, a daily average of 240 litres per capita, the highest in India, that statistic hides a grim reality. The capital’s raw water sources, primarily the Yamuna and groundwater, are insufficient to meet the demand. Put it this way: in 2019, Delhi had an average daily water deficit of 1,222 million litres.

When it comes to the Yamuna, the governments of Uttarakhand, Uttar Pradesh, Himachal Pradesh, Haryana, Rajasthan and Delhi had signed an agreement in 1994 on the allocation of the river’s waters, under which Delhi was permitted to draw 724 million m3 per year. Even today, Delhi’s share remains the same, though its population has increased by about 22 million since then. The groundwater situation is no better, with water-table levels almost halving in the past 20 years as a result of overexploitation. The city’s water supply network is also in a dire state.

Though the Delhi Development Authority says its pipe network covers 93 per cent of the population, the 2016-17 Economic Survey of Delhi estimated that 40 per cent of the supply is lost to leakages and theft.

One way to address the water shortage is to increase the production and use of treated wastewater—this could be used in a number of sectors, including agriculture, construction and industry. It would also mitigate the heavy pollution of the Yamuna. In recent years, several innovative projects have been launched, such as the Indo-Dutch collaborative effort LOTUS-HR (Local Treatment of Urban Sewage Streams for Healthy Reuse). This project is experimenting on the discharge of the Barapullah drain.

Since 2017, Professor T.R. Sreekrishnan of IIT Delhi’s department of biochemical engineering and biotechnology has led a team of researchers from IIT Delhi, TERI (The Energy and Resources Institute) and NEERI (the National Environmental Engineering Research Institute) who, in collaboration with Dutch institutional partners, have been working on a pilot project to recover usable water from the Barapullah drain. “We are examining the efficiency of various technologies in removing conventional pollutants and emerging contaminants such as heavy metals, pharmaceutical residues, personal care product residues and antibiotic-resistant micro-organisms from sewage,” says Professor Sreekrishnan. The project’s findings will be used to create a toolbox of technologies for treatment plants across the country. 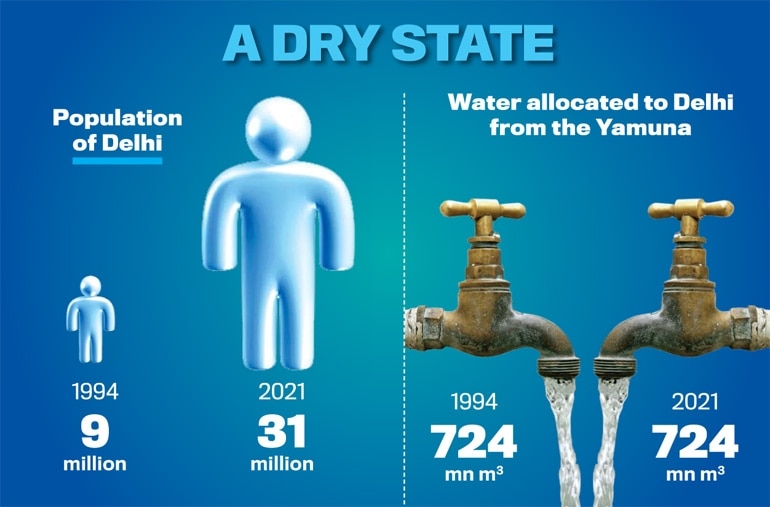 However, treatment is only one part of the story. The recovered water must also be used, on this count, over 30 per cent of water already being treated in Delhi is not being utilised. This water could, for example, be used to water the parks owned by the DDA and the MCD (Municipal Corporation of Delhi), which currently pump groundwater for that purpose. But to make this change, political will is needed to financially back the infrastructure required, as well as inter-departmental cooperation. Because of the lack of infrastructure like dual piping to supply treated sewage water separately from potable water, unused treated water is not even supplied to households. Most experts say that the installation of dual pipes in existing homes is not practically feasible, but there has been no attempt even to make it mandatory in new construction. Another option is to treat the sewage water further to make it potable, but because of the negative perception of consuming treated wastewater, this option is unlikely to be explored. “Technologies are available to treat sewage water to the level of making it drinkable. But there is a mental block against this, that’s why only water from rivers or groundwater sources is used to supply drinking water,” says Delhi Jal Board CEO Nikhil Kumar.

To increase the supply of raw water, the Delhi government has come up with some innovative solutions, like creating reservoirs on the Yamuna’s floodplains to use excess rainwater for groundwater recharge and the rejuvenation of water bodies and the creation of artificial lakes using treated effluent. It has also constructed new water treatment plants, pipelines and water ATMs for citizens not covered by the pipe network.

However, for a long-term solution to Delhi’s water woes, there is a need for better water-sharing among neighbouring states. For instance, while Uttar Pradesh and Haryana have abundant sources of raw water, around 90 per cent of their water is used in agriculture or industry. One example of better sharing would be for Delhi’s unutilised treated water to be supplied to industries and for agriculture, while neighbouring states supply their raw water for consumption to the capital. “We have proposed this to neighbouring states. Such exchanges can help the nation fight the water crisis. We need a ‘we first’ approach instead of ‘me first’ approach,” says Kumar.