In recent months, India’s agriculture sector has remained in the national headlines, not least because of the continuing protests by farmers on the borders of the national capital. With the violence on Republic Day, these protests made it even to the international headlines. The farmers, predominantly from Punjab and some districts in Haryana and Uttar Pradesh, have made it clear that their sole demand is the repealing of the Centre’s three farm laws. Digging a little deeper, the fear revealed is that the government is intent on liberalising the agricultural sector-developing a capitalist market mechanism with priorities other than assured crop procurement and buffer stocks.

In September last year, with much political drama and even allies resigning in protest, the Centre cleared three pieces of farm legislation-the Farmers’ Produce Trade and Commerce (Promotion and Facilitation) Act, 2020, the Farmers’ (Empowerment and Protection) Agreement on Price Assurance and Farm Services Act, 2020 and an amendment to the Essential Commodities Act. The government’s position remains that these laws open up agricultural markets, provide a legal framework for contracts between farmers and private buyers and a better framework for electronic trading. They also ease restrictions on the stocking of foodstuff like cereals, pulses, potatoes, onions, edible oilseeds and oil. 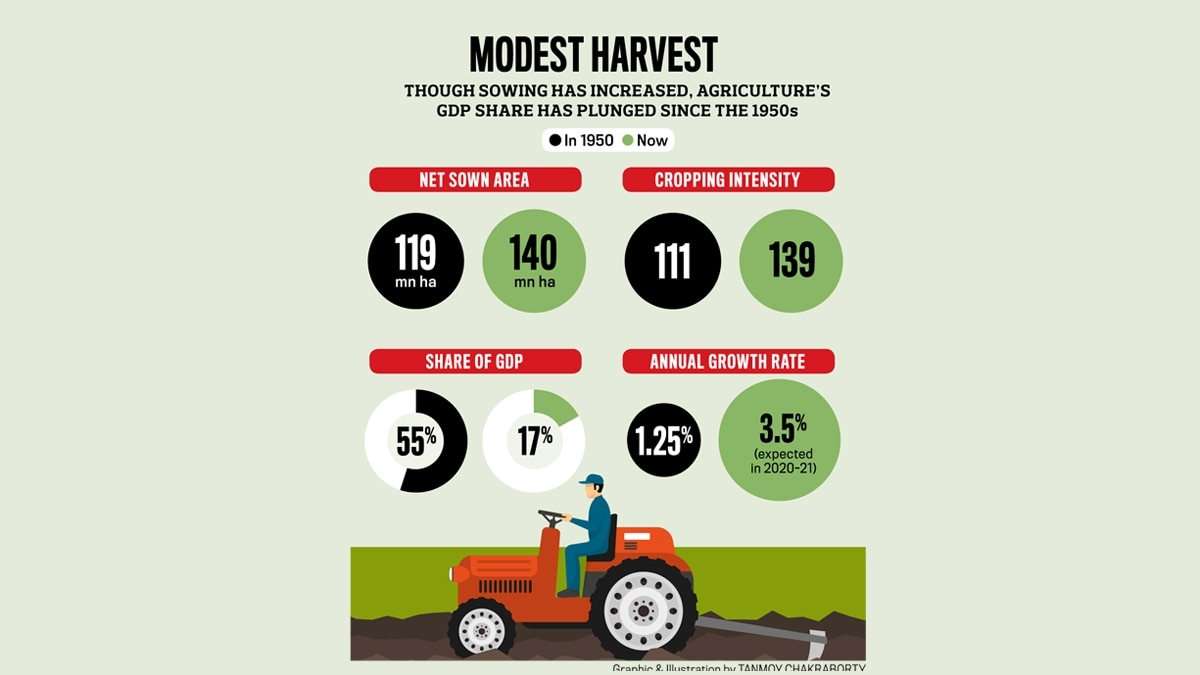 When India became independent, agriculture accounted for 54.4 per cent of the GDP and employed 60 per cent of the population. Since then, the sector’s GDP share has fallen drastically, to 17 per cent in 2019-20, even though farms continue to employ about half the country’s population. Agriculture, therefore, continues to remain crucial to the health of the overall economy-half of India’s population depends on this sector for income, which heavily affects overall demand in the economy. For the past two decades, the sector has maintained a regular 3 to 4 per cent growth rate. The government says these new laws offer policy stability and will give the private sector the confidence to invest in infrastructure to purchase, store, process and deliver produce from farms to consumers. In the 1960s, the Green Revolution led to a fundamental change in Indian farming-high-yield crops, fertilisers and improved techniques, used in areas with assured rainfall or reliable irrigation, led to India going from a food-importing nation to one with a massive surplus-almost 30 million MT of wheat in the last Rabi season. Punjab was a major beneficiary of that revolution, prospering from the sovereign’s commitment to purchasing massive quantities of rice and wheat every year at pre-determined prices.

While the existing regulatory system-assured procurement and minimum support prices-more than serves its purpose of protecting India’s food security, it also has economic consequences. For one, assured procurement over-incentivises the production of a handful of crops. Secondly, support prices get in the way of international trade-despite intense negotiations at the WTO (World Trade Organization), India still remains outside the international Agreement on Agriculture. In the domestic context, despite efforts being made to encourage the growth of private markets and contract farming in the past decade or so, state government have moved very slowly, with only 17 states having a legal framework for contract farming, only 15 having livestock markets and only four with established processes for land leasing.

While the Supreme Court has for the moment suspended the laws-the matter will be taken up in June this year-this reform could have major consequences for the sector’s trajectory in the decades to come. Supporters argue that without these laws, private businesses do not have the policy certainty they need to invest in infrastructure and set up supply chains to markets, which will leave the sector’s growth bound to the APMC markets. They also say that the reforms still require many follow-ups-land leasing laws, title reforms, infrastructure development and regulatory frameworks for quality assessment and payment. For now, the Centre has announced the setting up of an Agri Infrastructure Fund worth Rs 1 lakh crore to support such projects.