India has improved solar capacity and use. It is now well on its way to making the switch to non-fossil fuels. 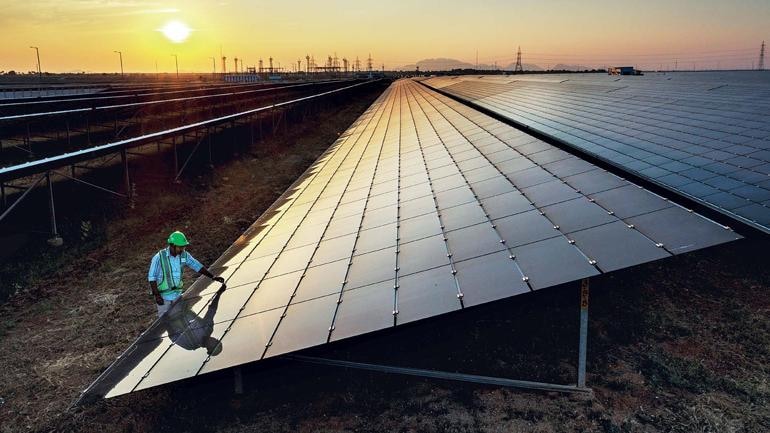 India may have to import as much as 84 per cent of the petroleum required to meet its energy needs. But there is one fuel we have in plenty: sunshine. Most parts of the country have clear, sunny weather for 250-300 days in a year. That is now being harnessed to bring a revolution in energy that could drastically cut down the country’s dependence on fossil fuels and enable it to meet the two goals Prime Minister Narendra Modi committed to at the 2015 Paris Agreement on climate change. As part of its nationally determined contribution (NDC), Modi pledged that India would reduce the greenhouse gas (GHG) emission intensity of its GDP by 33-35 per cent by 2030 from 2005 levels. India also committed to achieve 40 per cent of its installed capacity of electric power from non-fossil fuels by 2030, a 33 per cent jump in its non-fossil capacity in 2015.

Since then, India has increased its solar power capacity with a determination admired by the rest of the world. In the past five years, we have enhanced our solar capacity from 2,600 MW to an impressive 37,474 MW. Solar is all set to overtake wind power’s installed capacity of 38,624 MW and will soon become the primary source of renewable energy. Renewable energy sources, including solar, wind, small hydro units and biomass power, are now 91,153 MW or 23.5 per cent of the country’s total installed capacity of 375,322 MW. With tariffs dropping dramatically in the past few years and currently at around Rs 2 per unit, solar power has become cheaper than thermal power. The key challenge now is to get state-run power distribution companies to integrate solar generation into their power grid requirements. 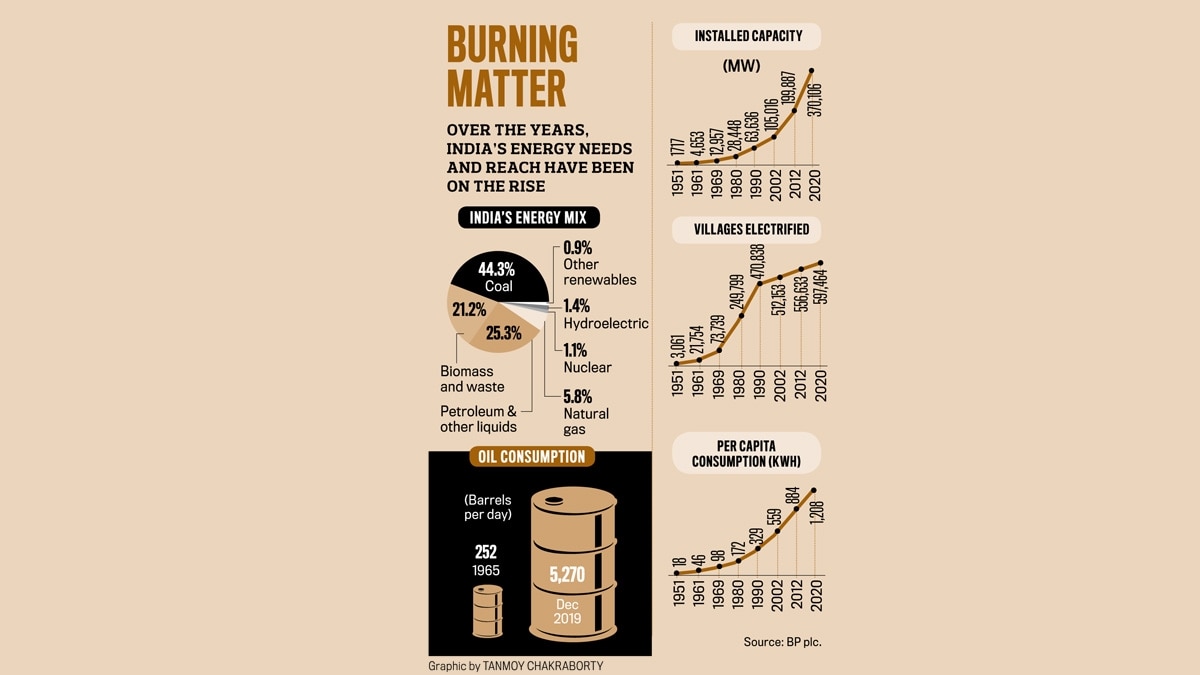 Source: Ministry of Statistics and Prog. Implementation and the National Power Portal (Graphic by Tanmoy Chakraborty)

Meanwhile, apart from encouraging states to set up large solar parks that provide incentives to entrepreneurs, the Modi government launched an innovative scheme in 2019 to incentivise farmers to instal solar-powered irrigation pumps. Called PM-KUSUM or the Pradhan Mantri Kisan Urja Suraksha Evam Utthan Mahabhiyan, the scheme has three aims: supporting individual farmers to instal 1.7 million standalone solar pumps for agriculture use; providing hefty incentives to individual farmers or cooperatives to set up solar power projects of 500 kW-2 MW capacity around their farmland; allowing farmers to sell excess capacity to state discoms. The aim of the scheme is to add solar capacity of around 25,000 MW with central government support of around Rs 34,000 crore. 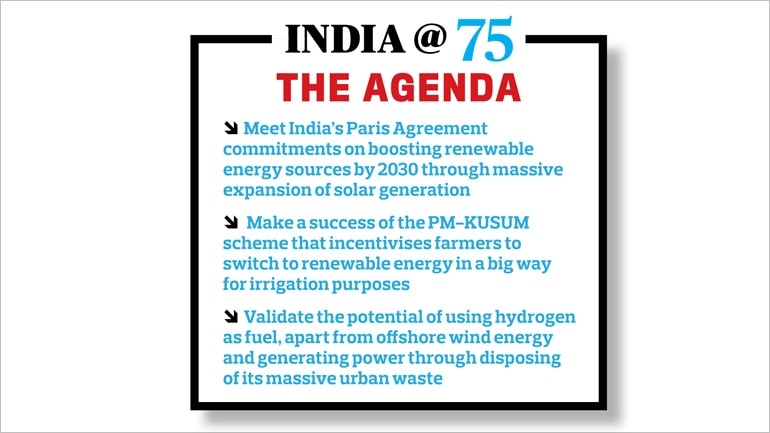 India is a founding member of the International Solar Alliance-a grouping of over 100 countries collaborating to advance the use of solar power by providing funds to develop better technology and sharing and learning from their experiences. With the country having a vast and windy coastline of over 7,000 km, it is setting up offshore plants for wind energy to generate power. The costs may still be prohibitive, but India is working in collaboration with other countries to reduce them. The ministry of new & renewable energy (MNRE) is also working on generating power from sources that include incinerating garbage to generate energy, given that Indian cities generate huge amounts of biomass waste. An exciting area is the use of hydrogen as a clean fuel for motor vehicles-the ministry is supporting several groups researching it. With all these initiatives, India is confident of meeting its Paris commitment to reduce fossil fuel dependence well ahead of schedule. Not bad for a country that was once seen as a laggard in implementing its climate change goals.